We're going from the oft-voted 'greatest PC game of all time' to a Guinness World Record holder with this entry: the fastest selling video game of its time, players the world over couldn't get enough of hacking and slashing their way through thousands of foes in Diablo II.

The first Diablo title has already had its time to shine on the 1001 list, and I wasn't really taken with it. Does the mega-selling hit sequel do anything different in order for me to see it in a better light?

I was lucky, once again, to find Diablo II thrown away in the trash in pretty good condition. I was unlucky to find only discs 1 and 3, and no accompanying information to actually make use of those discs in any legal fashion, so I'm not playing Diablo II here.

It's available online, of course, and I've spent far more than it's going for on games that aren't worth it, but I'm hesitant because of my experiences with the first title. 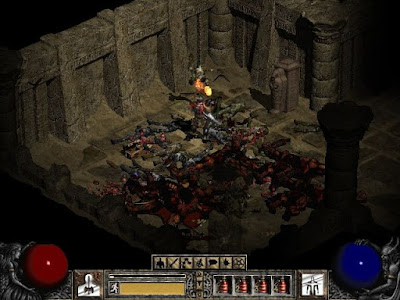 An increased and updated character selection screen allows you to traverse through randomly generated levels as fighters, druids, sorcerers and the like, each with their own strengths and weaknesses, as you'd expect. 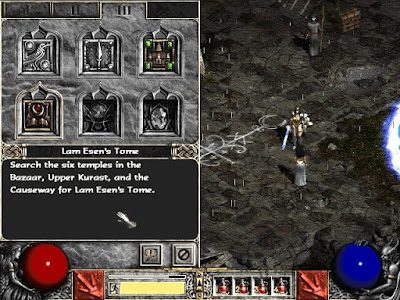 I was surprised, looking at screenshots after the video, that Diablo II can have quiet moments in what is described as towns or other safe spaces in the perilous landscape. There are even quests, which give you something to do when you aren't melting the faces off of everything in sight.

But at its core, Diablo II is about finding your way to certain spots on the map to descend into a dungeon deeper and deeper until you throttle the life out of a boss. Do that a few times and you've completed the game. 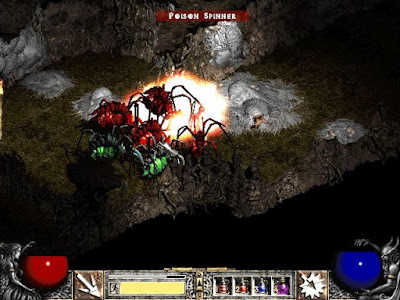 Don't make the mistake of thinking that that's easy, though. It's not. You'll be dying all over the place if you're not prepared. Enhanced weapons and armour will help you out, as will bucketloads of health potions and the like, but as it's a real-time game, every single click you make should be the right one.

Enemies don't come at you one at a time, but one horde at a time. Loot isn't dropped but dumped upon the floor. You've got scant seconds to search through it for what you want before another horde descends on you, and you're doing all of this while trying to fill out the map enough to find relevant points of interest and progression.

The map, as well as your inventory, are even viewable while the game is on-going, such is the importance of never ever standing still. Ever. The map is overlaid right on top of the screen, which is something you'd absolutely have to get used to. Every time I think 'of course it has to be that way', I quickly think 'really though? Because it ain't perfect, surely?'.

Clearly, I've not played enough. Or any, of course.

And because I've not played any, I can't really finalise this post. From what I've seen, Diablo II is more of the same. You have more choices to make in terms of character than before so you can approach the hordes in many more ways. Finding out the best load-out took many a gruelling hour of trial and error in the past, but having been played for close to twenty years now, I'd imagine there are some go-to builds for stomping mudholes in all these monsters by now.

Seeing it played really rather quickly reduces Diablo II to a mad scramble through random maps, clicking like it's going out of fashion to cast spells, attack foes, heal up, gather loot... I mean, there's clearly skill involved in playing Diablo II like a pro, but it still looks like it's 'just' a case of running and clicking and running some more.

I know it's more than that. I know playing it with friends in the multiplayer mode opens up untold hours of dungeon crawling, but for what? To say that you've managed to get through the game and its millions of obstacles?

If what you want are simple rules and a challenge, and something that must involve skeletons and demons and fireballs, I suspect Diablo II could be the thing for you. I'm still unconvinced it's the thing for me.

More of the same you (and I) say? Diablo II uses less than a single per cent of the code used in Diablo, having been made from the ground up.