Only two thousand there are. No more, no less. 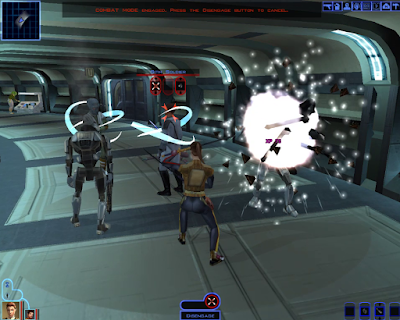 At the time of writing, Star Wars: Jedi Fallen Order has hit the shelves, and Star Wars: Episode IX - The Rise of Skywalker is a smidge over a month away. I'm in a bit of a Star Wars mood, despite not really going mad for either the Dark Souls-esque action game or the attempts to make Episode VIII mean something.

But I like Star Wars, on the whole, and am looking forward to playing Star Wars: Knights of the Old Republic, the Xbox RPG that I know next to nothing about, save for it being really rather well received.

I didn't have an Xbox and wasn't a PC gamer until this 1001 blog started, so I have missed out on the action for 16 years now. Who are the characters? What's the plot? Why is it so good? I've absolutely no idea, and we're going to change that right now.

Technically difficulties, hang on. We're going to search the internet for 'KotOR crashing after character creation', read a five-year-old Steam post, turn of Frame buffering because... duh?... and there we go!

I know that KotOR is set thousands of years before the films, and that's about all I know going in. With John Williams' score fanfaring through the speakers, and another yellow text crawl drifting off to the vanishing point in the stars, KotOR is about as official a Star Wars game as you can get. This isn't a half-arsed attempt to cash in. They're using the right font and everything. That's attention to detail.

I made three female scout characters before finally finding out how to even start the game, and you can either have the game generate stats for you, or customise them yourselves. With no idea what stats are good or overpowered, I let the computer do it all. After the intro cinematic, a woman in her underwear. Obviously.

That's us then, inexplicably sleeping through a Sith attack on the ship. I think we've got some problems, other than the Sith, that is. It's a good job this guy is on the ball because I need to know a fair few things that should probably be easy enough to figure out on my own... 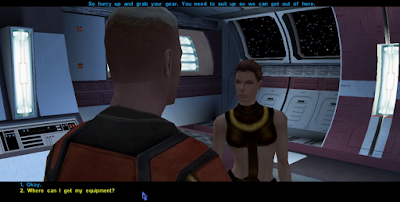 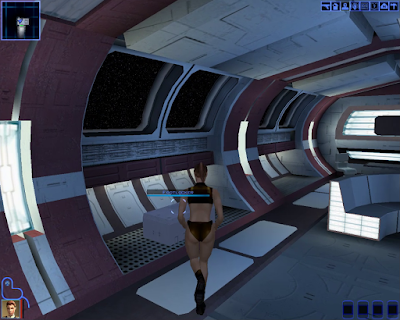 It's a funny way to start a game. Explosions rock the ship from all sides, but this guy is happy to chat, dumping the tutorial into our lap in the most obvious of manners. Finally in control, we get used to moving by holding down both the mouse buttons.

The right button moves the camera around, and the left button is used to point and click on things. If there's nothing to click, then it acts as a 'walk forward to where I'm clicking' kind of button. So, two mouse buttons to walk it is, though there are movement options on WASDZC, if you want to use the keyboard.

One by one, we're introduced to the way this game does things. For the most part, you can assume how it acts - an inventory stores your stuff, an equipment screen shows what you're wearing and holding, a journal keeps track of your notes and so on. Sometimes it does the unexpected, like this door. 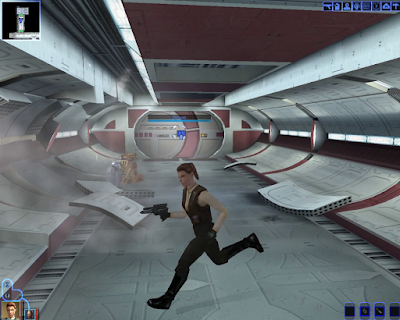 You can switch between party members so that they can do something they specialise in, like opening doors (Thank you, kind sir). But KotOR seems to be set up so that you are the one and only character that matters. Well, let me rephrase that. You are you one that matters to you, and the rest of the party are there to help you out.

Case in point, after opening the door, I immediately switched back and carried on. Couldn't I have just asked this guy to open the door for me? Did I have to switch over to him? 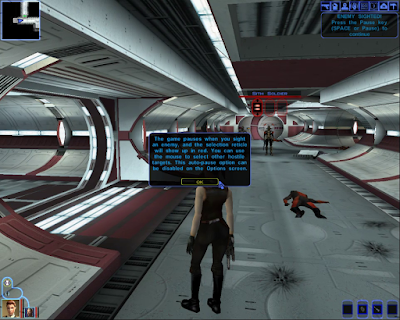 The next tutorial is the combat tutorial. By default, as soon as you see an enemy, the game pauses so that you can select a course of action. With a weapon equipped, you can choose a target within range and the type of attack to unleash upon them. When you're ready, you can unpause and watch the action unfold. 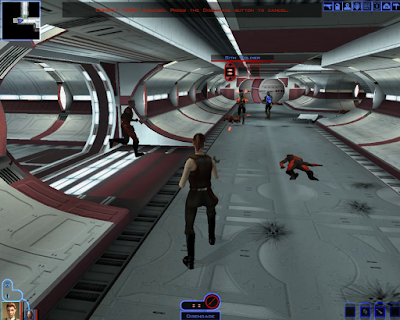 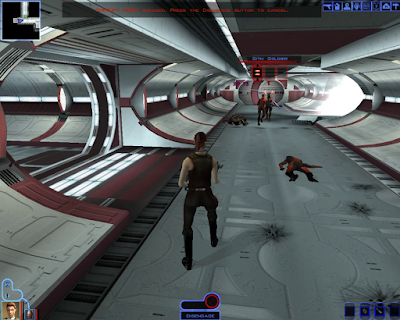 And that's all you do. No extra clicking seems to do anything unless you're switching targets, and there's no way to do better in combat. You just sit and watch until one side is left standing. It's a little unsettling, going into a fight where you don't appear to have any control over, well, anything, but if that's the way it's done in KotOR, that's the way we'll get used to doing it. 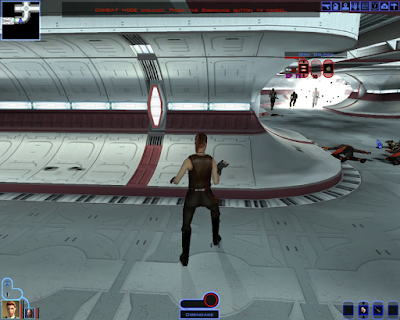 Picking up some grenades will give you another option to choose when the combat is paused. Lobbing a grenade into a group before they're aware of you seems like the best way to start a fight, and when you get hold of different types of grenades, you can stun your targets instead of killing them. 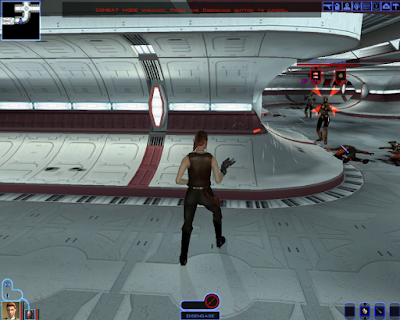 As I work my way through the ship, I stumble across a fight between a Sith and Jedi, lightsabers glowing, sparks flying. The Jedi comes out on top. Is this our next party member? 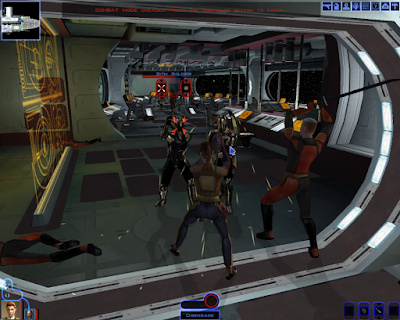 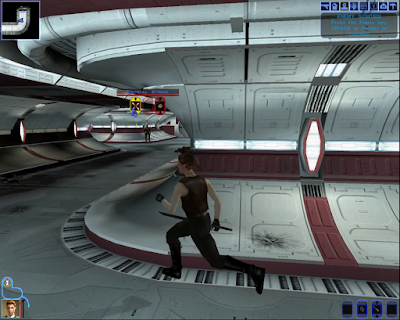 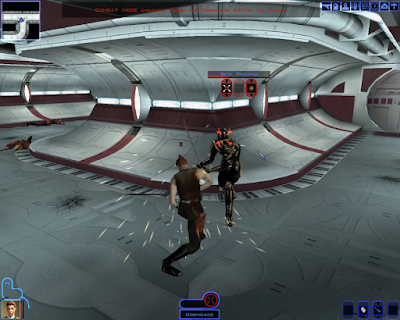 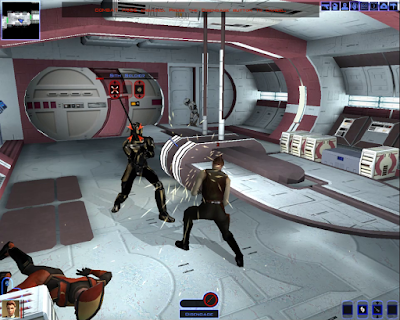 More Sith, more carnage. This ship is getting walloped. We need to head to the escape pods, and a voice on the comms tells us that the route there is full of Sith. He mentions we can deal with them with brains as well as braun. Do we try to get a combat droid to help, or see what the ships' defences can do? 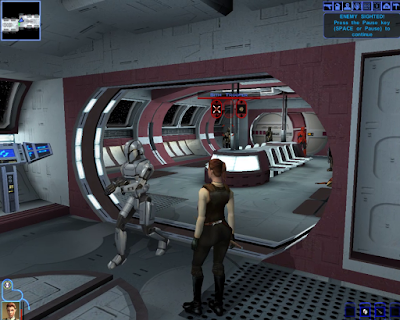 Dude, come on, I know I fixed you, but I didn't stick your head on back to front. 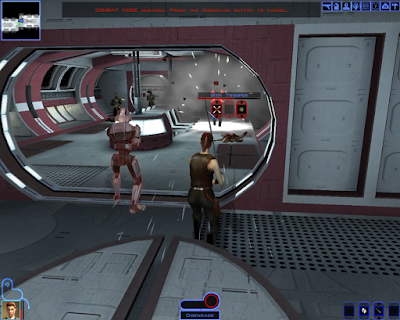 We're the last two survivors? So that blond guy who was with us, the one that went to 'buy us some time', he didn't make it? My party has gained and then lost a member, just like that? Gah. This galaxy is harsh.

With no other option, we climb into the escape pod and get out of here, crash landing on the planet below. Our target, a woman called Bastila, left in an escape pod before us. We need to find her and support her cause, which I assume is somewhat rebellious in nature.

But, obviously, it can't be that easy. The crash knocked us for a loop, and we've been drifting in and out of consciousness for days already.

I'd been playing for half an hour at this point. The controls were a little fiddly in places, but then I was mainly only using the mouse in a strange way. A lot of the menus and HUD stuff went untouched. I assume I'll need to know more about my inventory later, but for this tutorial? Once is enough, onto the next piece of advice.

The voice work wasn't too bad, though we don't appear to have one ourselves, sadly. Character models are showing their age, but are perfectly watchable. It feels like Star Wars, but it is different. It feels like a great action-RPG, but it's a little different there, too.

I need to play more.

Looking for any and all information leads us to talk to whoever we can, with this Twi'lek standing out. He speaks in his native tongue. Slowly. Most of the aliens do. They talk quickly, but at great length. By the time you've read the subtitles, they're only a third of the way through their alien linguistics. It's flavour, sure, but it's plodding too.

He sells us an energy shield, I think, and we're left with a handful of credits. It better come in use.

This old Janitor is friendlier, pointing us towards the cantina, the one place in Star Wars where you can find whatever it is you're looking for. Let me guess. There will be a band of Bith, dancing Twi'lek girls and blue milk on the menu. (Two out of three, as it turns out) 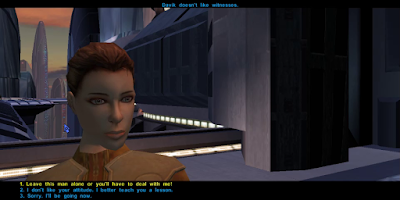 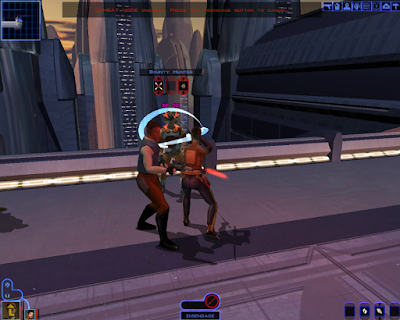 As I get outside, I see more and more reason to enjoy KotOR. Just have a look at what I get up to over the next hour of playing, before I said to myself that I really need to save and get started with this blog post. I break up some thugs trying to extort some protection money from the locals. 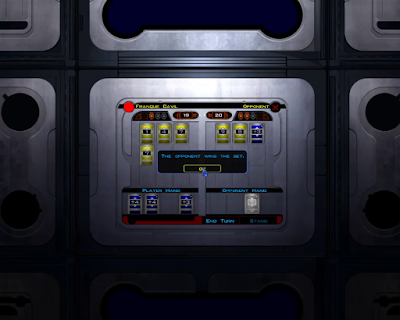 I'm introduced to, and promptly lose at, another card game stuffed into a video game RPG. For someone who likes card games, these video game ones tend to wind me up. Pazaak isn't too bad, but I can't stick around and lose any more credits.

I could make more money in the arena, which absolutely isn't lethal anymore because deaths in the arena are no longer allowed by law. Besides, if the arena gets shut down, we're all outta money, and the Hutts don't want that.

I lose another 20 credits to a con artist who operates around these parts. I wonder if we'll bump into him again. He better hope not, now that I'm walking around dual-wielding vibroblades. Nobody cares. My buddy, (I really should know his name. Begins with a 'C'?), is even rocking two blaster pistols. Even the patrolling Sith guards are okay with that. Some of them are even here, relaxing in the cantina while off-duty.

We even get chatting to an officer who welcomes us to a Sith party elsewhere. Hell yeah, we're gonna be there. For strictly rebellious reasons. Extract some information from you guys, that kinda thing... 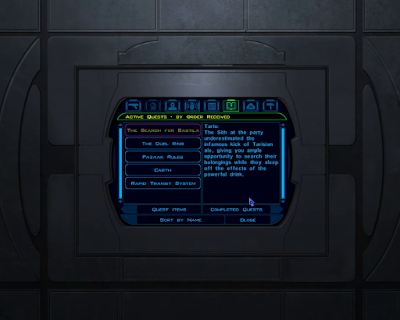 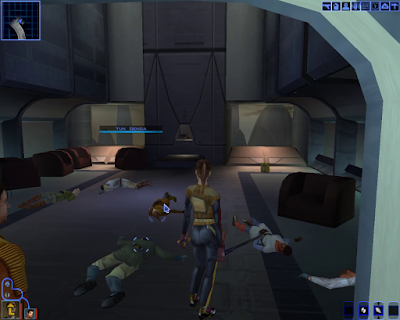 Or you're all going to get absolutely wasted on the local ale and leave your uniforms unattended. Thank you very much! 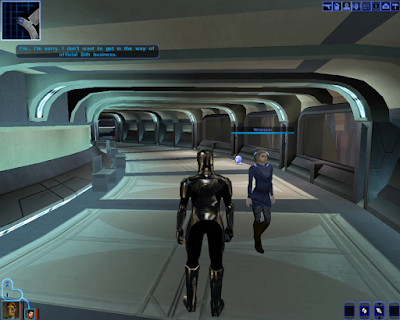 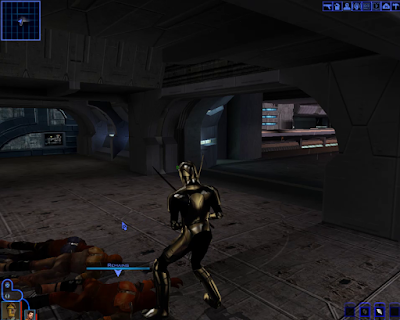 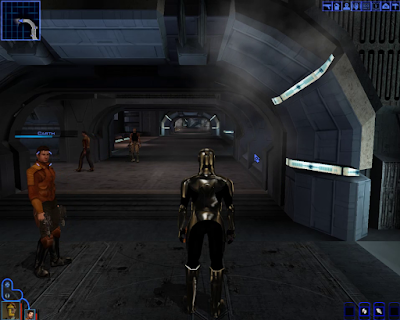 I really had to end my time with KotOR, or I could have been going for hours more. There's another bar down here I could search for information - once I take off my Sith uniform. Can't be seen in there in this shiny get up...

Have I scratched the surface of this game? Barely. Do I want to dive headfirst into it? Definitely. KotOR, despite its quirks, repetitive character models and voice artists, and weird combat, has grabbed me like nothing else has in a while, it seems.

As soon as this has been typed up and I remind myself that I need to eat, I'll probably fire it up again and see what other stuff I can get up to. I'm sure there's a linear story that I should be following, but I'll stumble across it on my travels eventually, right?

Where will the story take me? Where will any of these side missions lead? Will the auto-levelling help or hinder my progress? Will I get the hang of managing my party? Is there anywhere I can sell all these unused weapons? There must be. I need to make credits. Or do I?

So many questions. Not very important questions, but ones I want to be answered.

Would you like this if you weren't a Star Wars fan? Debatable. Probably not. Even as a fan, I'm a little disappointed that our first port of call is the cantina, and that the band are made up of Bith, as though they're the only aliens that play music in this universe. I'm disappointed because, for every Star Wars trope I find, there is something that KotOR does that is unexpected and of its own.

It needs to lean on the familiar to attract players but then leaps into its own tale. KotOR feels fresh, just like Jedi Fallen Order no doubt feels at least a little fresh. I wouldn't know. In ten years, I might get around to finding out. After I've played KotOR.

The developers were given a choice for their game: set it around Episode II, or go four thousand years back to a period that has hardly been covered before. The promise of more creative freedom pushed them in the right direction, back to a long time ago...