"Thank you, Carl. You saved me from having to kill them all myself." 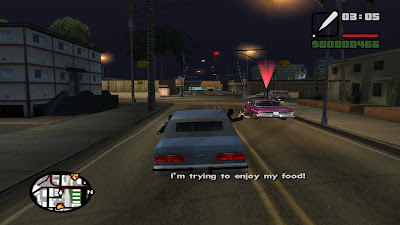 Where do we start with this one? Coming just a couple of years after the excellent GTA: Vice City is the even more remarkable Grand Theft Auto: San Andreas, set in a grittier, more realistic parody portrayal of the west coast of America in the 1990s.

The game follows Carl 'CJ' Johnson's return to Los Santos and will take you through all kinds of missions, introducing you to many a ridiculous character as you pick your former gang up and put them back on their feet. 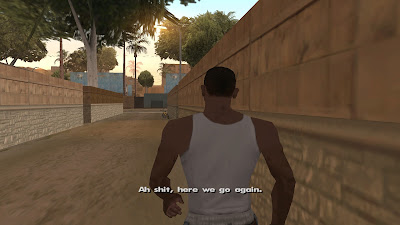 Like Vice City before it, I last played a spot of San Andreas a few years ago and took some screenshots for this very post. Do I remember why I chose them? Nope. Let's just reminisce once more, eh? 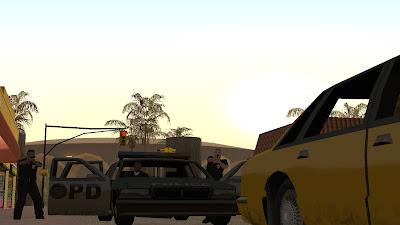 San Andreas opens with CJ returning to his home and getting warmly welcomed by the police. Samuel L. Jackson himself voices corrupt cop Frank Tenpenny, and he's not the only prominent voice you'll hear scattered throughout the game. You'll have more luck identifying the vocal talents if you're a fan of west-coast rap, so that rules me out. 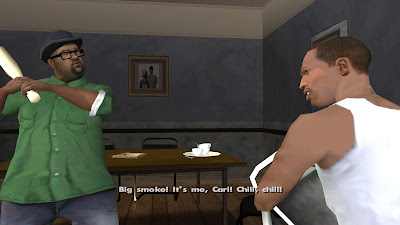 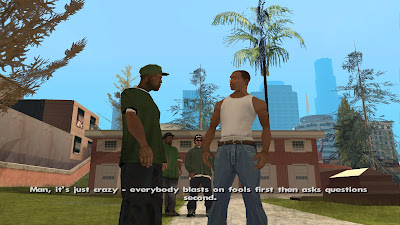 Times are tough for the Grove Street gang. CJ's mother was murdered in a drive-by shooting, his brother, Sweet, blames his absence on everything going south, and with the help of close friends Big Smoke and Ryder, CJ aims to re-establish the gang's dominance in town. 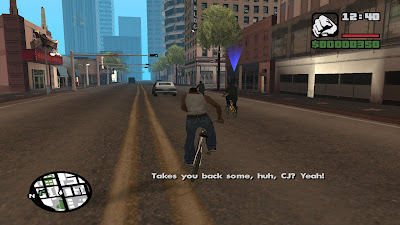 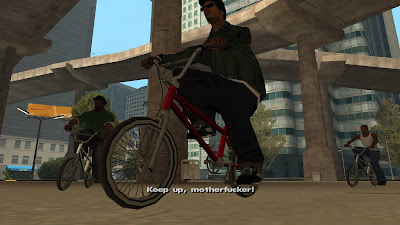 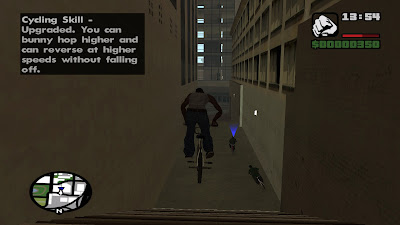 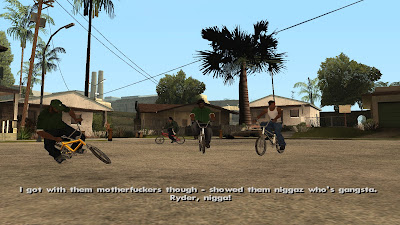 I always remember the start of San Andreas as putting you on a BMX and having you tear through Los Santos after your mates. They make their first appearance in this game, giving players yet more methods of travel around the map, and introduce the RPG elements of the game.

The more you do something, like riding, running, shooting, the better CJ will get at them. This even spills over into the food he eats and the exercise he does. You can pig out on junk food and have a fat CJ lead the gang, or hit the gym, focus on the weights and pack on the pounds with muscle instead. Or, you can strike a balance to be strong, but agile, able to leap and jump over fences and between buildings.

I'm getting rather off-topic here, but back in 2005 a parkour documentary hit the TVs in Britain, and a large number of youths took to it, myself included. I was also a media student around that time and making movies was a thing. Making machinima was also a thing, and I somehow *cough cough* got a capture card and some editing software and set out plans for a San Andreas Parkour video, such was the level of detail in its RPG mechanic.

I was struggling to make a jump that would look lovely, but a friend of mine could make it with ease. The reason was that our respective CJ stats were different. Mine would actually have to hit the in-game gym and lose some muscle mass to make it across.

Anyway, that never came to anything, so back to the game. 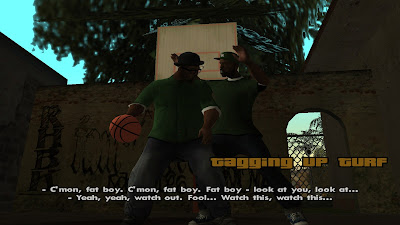 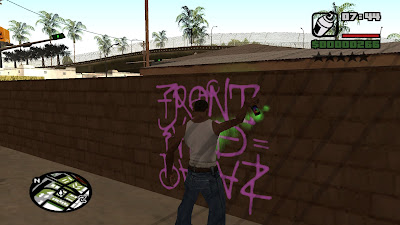 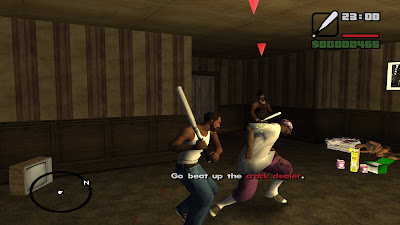 Missions in the early stages are nice and straightforward affairs. Beat up some rival gang members, spray paint some signs, slowly reinsert Grove Street back into the picture, that kind of thing. The game controls mostly like previous GTA titles, with subtle tweaks and improvements, some even coming across from Manhunt. Not that whacking people in the face with baseball bats will produce graphically violent videos depicting the carnage. This is GTA. It's not a violent game... 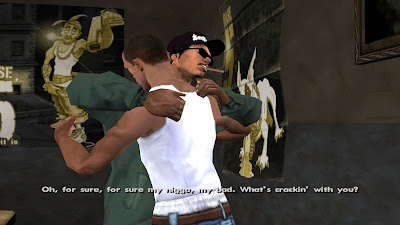 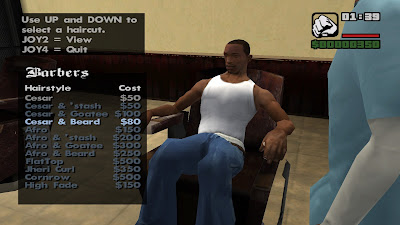 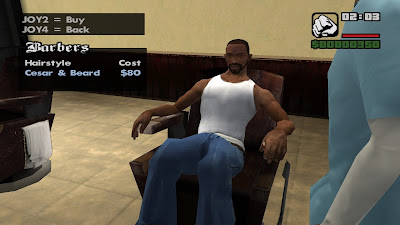 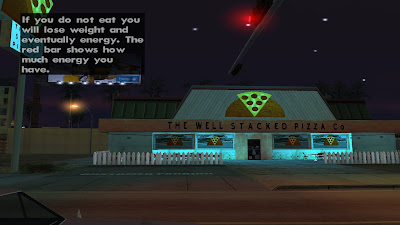 See, it's about hugging it out, staying stylish, eating right. Well, eating in moderation, perhaps. Unlike our friend, Big Smoke. 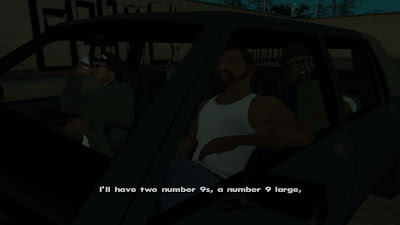 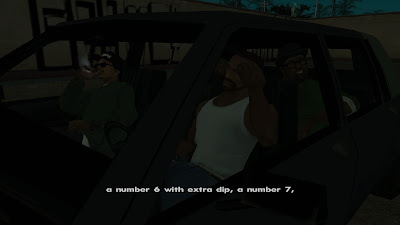 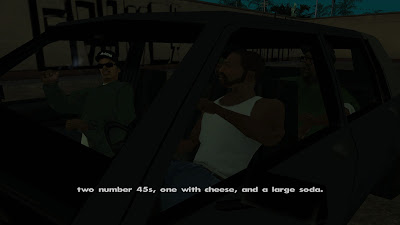 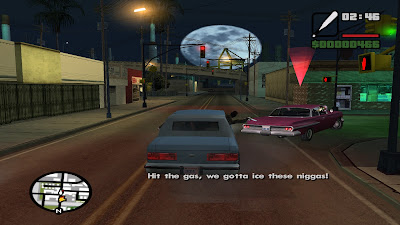 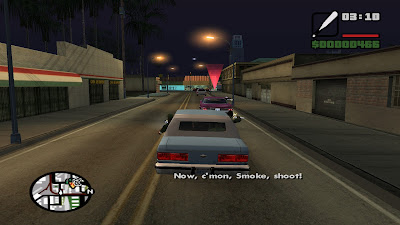 Our takeaway turns into a gang war, as Ballas attempt to exact their revenge for us beating the shit out of them earlier, I suspect. Baseball bats are replaced by sub-machine guns (though I still have my baseball bat equipped here. I guess I'm too focused on driving than drive-bying) and the GTA part of the title starts to make itself apparent. San Andreas is hotting up. 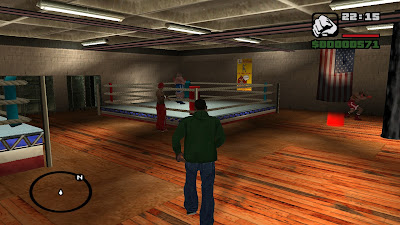 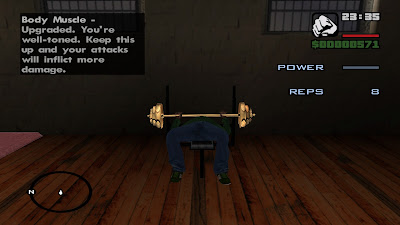 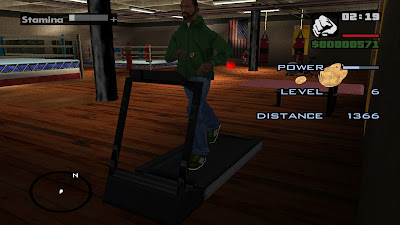 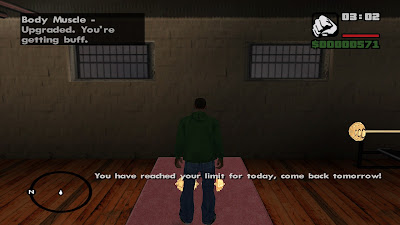 Sadly, the last images I have are of me going to the gym, something I've done more in games than I have in real life. Must be some sort of irony in that. Regardless, this is where my last trip to San Andreas ended. It's all memories from here.

As the game opens up, more and more of the enormous cast of characters make their way into your life, and like usual, you seem to be the only person capable of helping them with their varied, sometimes out of this world problems.

In typical GTA fashion, you'll be driving and flying your way across the sprawling map, chasing people down, engaging in an awful lot of fighting, and collecting this and that for all manner of folks' often shady purposes. You'll even (badly) pilot a remote control model plane and steal a jetpack from the military. Another ordinary day for a GTA protagonist, huh?

The map is huge, feeling more like a state than a city. That's probably because it contains three distinct cities, Los Santos, San Fierro and Las Venturas, each serving as their own hub of sorts for CJ to engage in another round of ridiculous missions for outlandish characters.

It was a map so big and packed with stuff to do that you could get up to whatever you felt like, should the missions themselves not be doing it for you. Take a trip up to the top of Mount Chiliad. Visit the Vinewood sign. Jump off the top of both and see how you fall. The sky is the limit, and even then it isn't. Hop in a plane or a jet and explore the map from above. Play in the biggest GTA sandbox there has ever been.

And for many players, they certainly did. San Andreas was the defining game of the generation. The top seller, the highly praised, unmatched open-world action-adventure title. The game to spend hour after hour after hour in, getting up to anything and everything you could imagine.

I said that I prefer Vice City more, and that may still be the case. I'm really not sure now. Both games are stellar. San Andreas has the benefit of all the improvements and updates to the way the game plays, though, so it's hard to ignore. I know I spent an awful lot of time here, back in the day.

It's often seen as the highlight of the series, and it definitely is a standout title. I'm not sure how well it has aged - I'll have to pick it up again and find out - but I know it's still got a dedicated community of speedrunners, for example.

For gamers of a certain age, San Andreas probably had quite the impact on them. Many of my music tastes seem to be influenced by GTA titles. I'll probably listen to a fair bit of the soundtrack for the next hour or two.

To suggest that you play even just a little bit of Grand Theft Auto: San Andreas is obvious. There were better looking PlayStation 2 titles. There were probably better playing PS2 titles, too. But there just wasn't anything that could come close to what San Andreas offered. And that's only one of so many reasons why it's recommended playing.

Multiplayer modes were available for side missions like Rampages, teasing the idea of the online offerings in future games. One player can cause a lot of mayhem. What could two do?