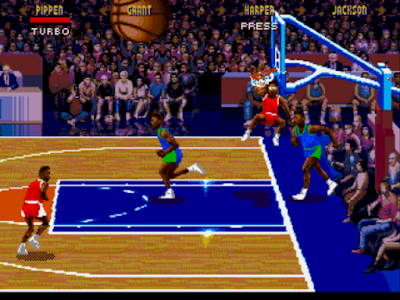 Previously, I mentioned how I've probably played more of Street Fighter: The Movie than any other version of Street Fighter, and that's because it was the only game in the series that my PlayStation owning cousins had. They had a few other games in general, of course - much better games - one of which was an incarnation of NBA Jam, if I'm remembering correctly. If I'm not, I don't know what it was...

NBA Jam takes the sport of Basketball and turns it up to 11, but not in the sense of taking things 'extreme' or whatever, but of making the players and their plays larger than life. The series turned heroes into superheroes and fast action into blisteringly quick games of high scoring tension.

I have not played a game like this in quite some time, and I'm looking forward to doing so once more. 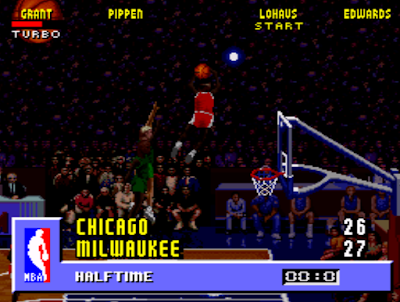 Move, pass/tackle, shoot, turbo. Do they have tackles in Basketball? Slap the ball out of your opponents hands, in some kind of legal fashion. You know what the hell I'm talking about. NBA Jam is simple to the point where it wants you to forget about the game and just have a blast, and with elaborate and extraordinary dunks coming every few seconds it's hard not to. 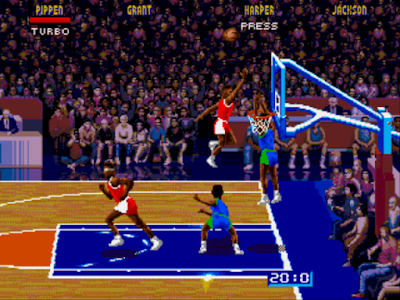 No matter what version you play, the likenesses of real basketball stars and their teams are caricatured juuuuust enough to keep some semblance of realism in what really is an arcade title in every sense of the word.

We know they can jump, but in this game, they will fly, and if they're on fire or turbo'd up to the eyeballs, they absolutely soar through the air, ball in hand, soon to be slammed through the hoop. 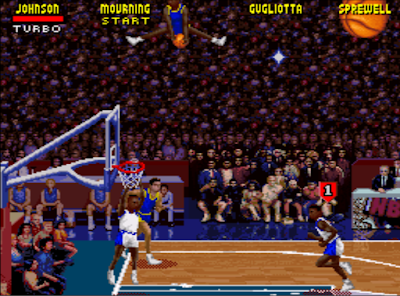 I played both the SNES and Sega Mega Drive versions of NBA Jam, as well as the Tournament Edition of the game for the SNES, updating the rosters and packing in the secrets. I don't see too much difference between either version, on either system, and the only thing I could pick up that was different from the arcade original was that I think they were quieter, having some of the commentary dropped.

But they all include the classic lines that make NBA Jam stick in players' minds after all these years. The 'Boomshakalaka's, the 'He's on fire!'s, the 'Is it the shoes?' - little things that on their own don't necessarily make a game great, but together add up to something fantastic. 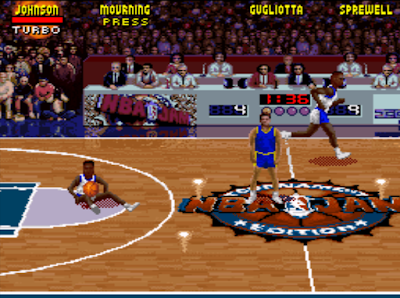 That's not to say NBA Jam will escape without me moaning about something, but my gripes are minor.

Easily discerning whereabouts on the court you are can be a little tricky sometimes, and in a game where every attack usually leads to some kind of score, not being in the right place to block a shot can turn victory into a defeat.

On the flip side, a few seconds later and you can turn defeat into a victory just as easily, with or without a quick burst of turbo, so quit complaining and get back in the game. 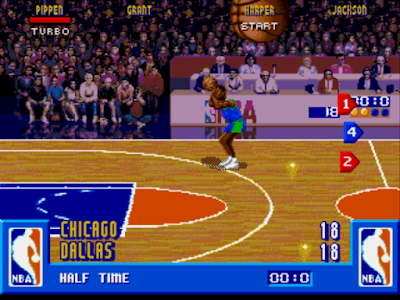 I've not played NBA Jam against human opposition since my childhood (if indeed it was a version of NBA Jam back then), but I'm guessing that will be where the really good times are. It's so easy to pick the ball up and smash it into the basket that even a novice can get the hang of it before too long.

They might not want to keep playing against an expert, but if you've got friends of similar skill levels to you, then let the good times roll. There's nothing quite like taking the credit for a canned animation... 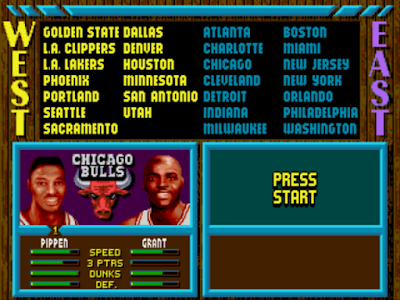 Fifteen years after its initial release, developer Mark Turmell confirmed that the Chicago Bulls would purposely miss late game shots in close games against the Detroit Pistons. Who did Turmell support? That'd be the Pistons. Who are the only team I can name, and thus the one I'd gravitate towards playing as? That'd be the Bulls...