To Quit is to Lose.


In the late 1990s if I recall correctly (very early 2000s otherwise), I was at yet another cousin's house. He was younger than me and I was barely into double digits, but he really wanted to play a game on the computer that I hope his father got for himself, rather than his young and impressionable son because that game was Doom.

I don't remember much of it at all. I don't even remember playing it myself. Perhaps I only just watched. Whatever happened, Doom didn't leave a lasting impression on me, certainly from that encounter, and yet I - like many gamers I'm sure - know all about Doom, no matter how much we've played it.

It's time to grab our shotguns, chainsaws and BFG's because we're about to go to Hell. 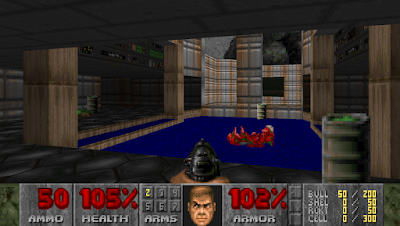 Despite Doom having been ported to everything from calculators to toasters to MacBook Pro touch bars to God knows what else, getting it to run on Windows 10 wasn't going to happen without a little help, and that came in the form of Doomsday Engine, a source port that brings your copy of Doom into the modern world - one full of particle and lighting effects, as well as the ability to look up and down.

Naturally, I turned off as much as I could - including the ability to look up and down - and got on with the demon slaying. 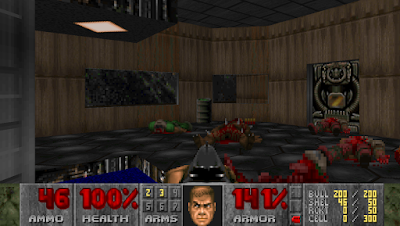 There's not going to be a whole load of in-action screenshots here - you know me when it comes to games that require both hands to be at the wheel, so to speak - so you'll have to make do with a load of corpse sprites on the floor of the grandfather of 3D shooters, one might argue.

Moving and shooting couldn't really be easier, especially because aiming isn't essential and ammo is plentiful, except when it isn't and you have to resort to your fist, but that's not a problem either, except when it is, but then you could always drop the difficulty. Doom isn't terribly taxing unless you want it to be, is what I think I'm saying.

The joy of playing Doom for me isn't so much the feel, the music, the sound effects, the iconic monsters, the bobbing about the place... no, none of that. The joy of Doom is knowing how it works and then marvelling at how the entire thing is one big pseudo-3D illusion. 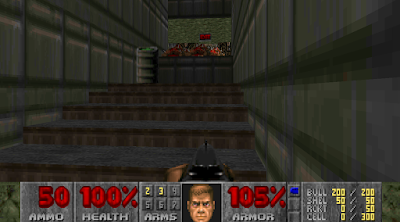 Back in the day, this staircase rising from the floor would have been unheard of, if not hugely taxing to computers, and would, therefore, be a talking point amongst gamers. One would imagine.

It looks so unquestionably 3D that to argue otherwise would be nonsense, but the more you see of Doom, the more behind the scenes information you learn of, and you more technical explanations you watch the more your eyes light up and your mouth goes "Bwwhuuuahh??!" 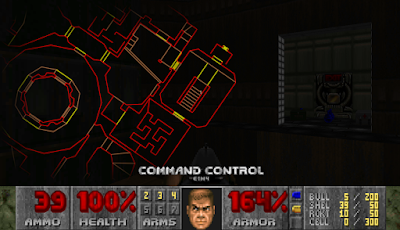 Check out a map of any level and you'll see that no rooms are ever found above any other room because that is a technical impossibility. We're just seeing things drawn at different heights relative to us, and that's all you need to fool our monkey brains into thinking Doom is incredible. Which it is. But it's not 3D, which would be really incredible if you know what I mean.

Incidentally, that's where my memory failed me and my desire to hunt the map for a solution over that gaping chasm disappeared, so my run was short. Doom does require some investigation in order to make progress through the maze-like levels - there are very few corridors here. 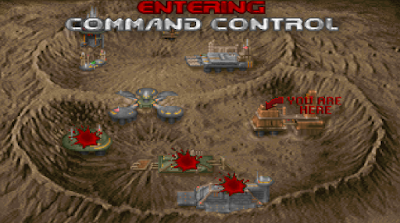 One thing I hadn't known much - if anything - about Doom is the plot. For the longest time, I assumed the plot was either unnecessary or was never there in the first place. Turns out we were left outside to guard a complex on Phobos (who the hell is going to walk into a complex on the Martian moon for goodness sake...) while the rest of our marine unit heads inside to see what all the distress is about.

The distress would be the kind that alien invasions give off, only this one is more demonic than alien, and you're now alone, on Phobos, armed with only a pistol and your knuckles (and thankfully whatever other weapons, armour and power-ups you find) to fight through the complex, escape Phobos and try it make it back to Earth. 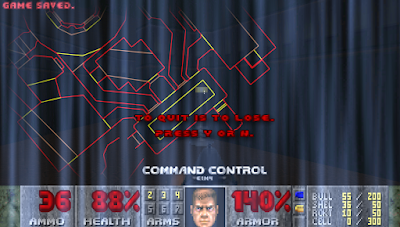 I'm no expert on Doom. I could tell you where one or two secrets are in the game, but there are a fair few more than one or two. I could barely tell you where to go and what to do next, and it was this that ultimately brought my run to an end - that and the slight motion sickness I got with the exaggerated head bobbing. I wonder if you can tone that down in the Doomsday Engine, or if it's just me.

While I know very little, I know enough to know that Doom is so iconic and so vital to the history of gaming that it would have been one of the first titles put onto the 1001 list.

It's so well loved that there are thousands upon thousands of user generated content out there for it, from levels to textures to sounds to reskins to full Doom-clones and extended storylines... you don't get Doom ported to the weirdest of tech if there's no joy in Doom now, do you?

For a click blast and the satisfying results of a shotgun, firing up Doom every now and then might as well be some kind of recommended advice from your doctor. Listening to that music, hearing those sound effects. Gah, it just doesn't leave you, does it?

Play Doom today. Play it like it was back in the mid-1990s, play with all the bells and whistles modern modders have put into it, it doesn't matter. Have some fun punching demons in the face while frantically searching for some ammo.

Development of the Windows 95 port was lead by then-Microsoft employee Gabe Newell. I wonder where he is now?