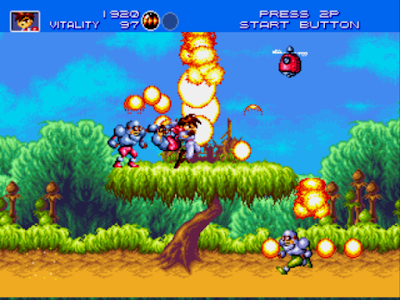 Sometimes it feels like there are an alarmingly high number of games on this 1001 list that I just don't know anything about. I don't think the number is that high, but I don't even know of Gunstar Heroes in passing, so I'm going into yet another game blind as a bat and seeing where I end up.

In this one, we play as Red or Blue Gunstar in a side-scrolling shoot 'em up run and gunner to gather a handful of crystals before the big bad robot known as Golden Silver uses them to wreak havoc on civilisation. We'll enlist help from Professor Brown and we'll fight General Grey's efforts to thwart us.

Based on the plot synopsis, it's no wonder I know nothing about this game... 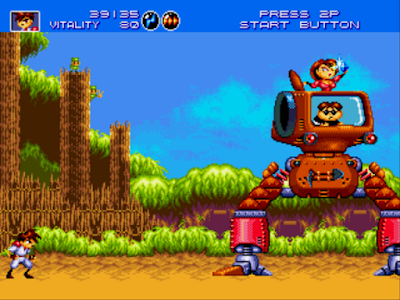 Gunstar Heroes is bright, colourful, a little goofy looking, a bit wacky, but it's all action. You will be shooting everything, and there's so much of it that you're able to shoot everything in two different ways, either rooted to the spot and letting everything come to you for a face full of fire or on foot while you race (albeit slowly) through the levels on your travels. 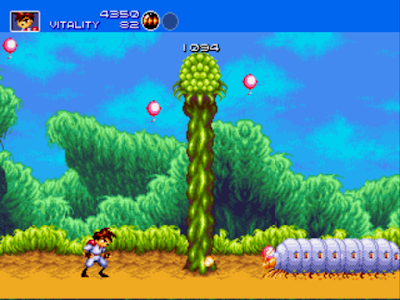 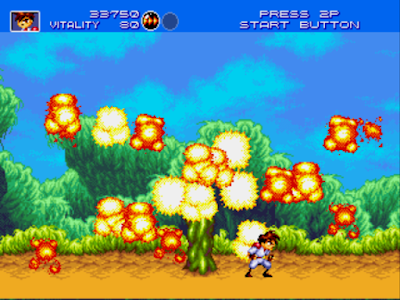 To show just how wacky this game is, the first boss I encountered was a giant vegetable that eventually exploded in dramatic fashion. And that's not just a one-off wacky boss. Well, it's at the wackier end of the scale, unless you count cardboard box robots as wacky too. 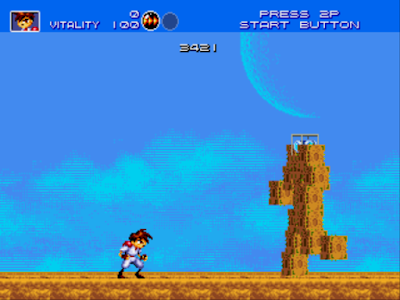 It's not all about bosses with Gunstar Heroes, but I was having too good a time with offing all the enemy with oodles of semi-customizable weaponry to take screenshots of that - even in somewhat on-rail segments.

There are four types of weapons, including lasers, flamethrowers and homing shots, and they can be combined in different ways to give you one of 14 different weapons to fight through the game with, and with so much going on you're encouraged to shoot everyone you can with anything you can get your hands on, all while enjoying the moments of humour scattered throughout, like these guys screaming for their lives in a train that's about to crash. 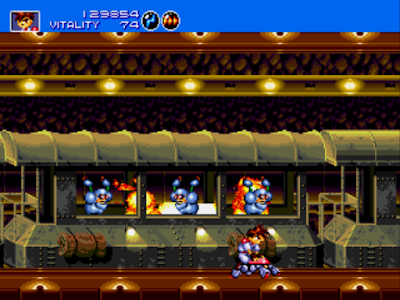 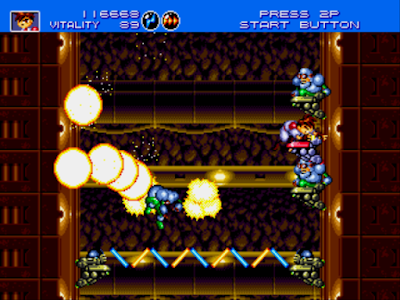 There was, sadly, a point where I hit a wall, on a boss with multiple forms known as Seven Force. Was it due to lack of skill or practice? Was it due to the difficulty setting? I'm not sure, but the great thing about Gunstar Heroes is that I can easily find out by having unlimited continues in order to try again, practising your craft along the way to the boss fight for a second, third, fourth, fifth time...

Movement felt a little slow in places, but maybe that was just because it was contrasted so heavily with the myriad of weapons there are blasting across the screen. Other than that and the plot, I can't think of much that I don't like about Gunstar Heroes so far. 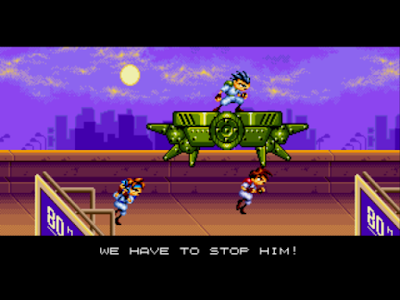 I don't know how much there is to Gunstar Heroes, or how far through it I got before calling it a day. I think it's a title I'd try again before resorting to a video, though. I've not got the fastest of gaming fingers when it comes to some games, but with no finite amount of retries to worry myself with, I can at least push through it until my desire craps out, rather than skill.

While I can't say for sure when I'll get around to playing it again, I can say that I liked playing it, and you probably will too. You probably won't love it, but as a way to pass the time and shoot everything on screen until it explodes, Gunstar Heroes is well worth firing up.

One boss was originally drawn as Hitler, essentially, where management told the developers to 'remove the moustache or change the character'.