The Citizens are Revolting


Let's just get this clear if I haven't already mentioned it. The idea of SimCity is great. Fantastic. What better way to light up the imagination than allowing gamers to watch their creations get built and develop in front of their eyes?

The top down, circuit board looking SimCity has been redeveloped into the genre-defining SimCity 2000, a game with everything you expect from a city builder of this era, and then some more things you forgot about. 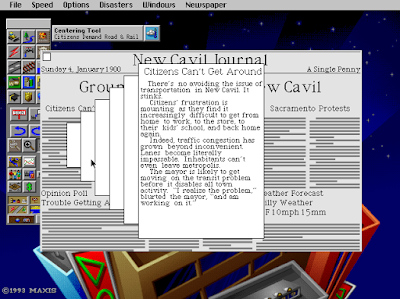 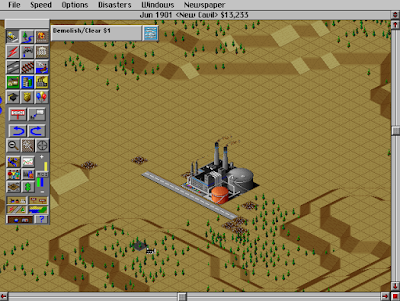 I enjoy seeing other people play city builders, if not because it allows me to moan that I would have done it differently, then because I'm often amazed at what time, effort, planning and patience can achieve in a video game.

That, unfortunately, means that I have a damn hard time starting city building because I always get hung up over how to start. SimCity 2000 is quick to tell me that my citizens can't get anywhere. They can't get anywhere because they don't exist - New Cavil consists of only a power plant, a road, and some mistakes. 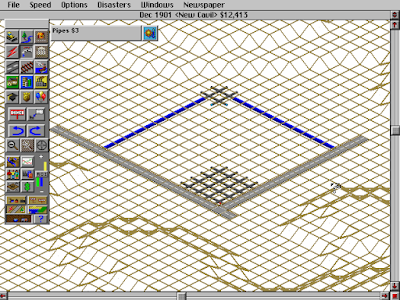 Soon enough there's a water tower with a few pipes, and different views and flashing icons prompt you to fix your mistakes early - before the citizens arrive. Which I'm sure they do... at some point... not quite sure how and when or anything... 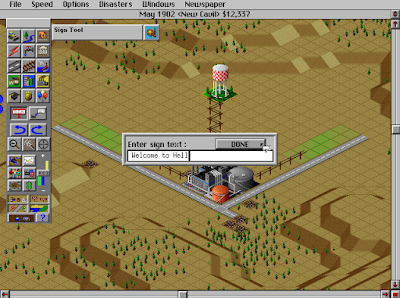 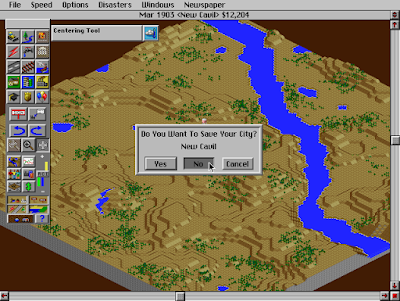 I was not pleased with having to wait, no doubt because I missed something important, so I quit and loaded up one of the scenarios that come with the game in order to start in the middle of something. 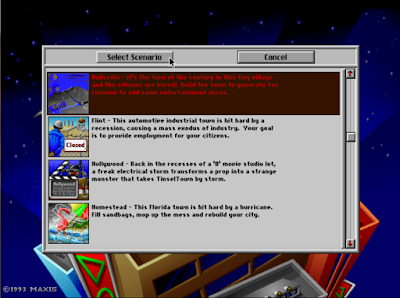 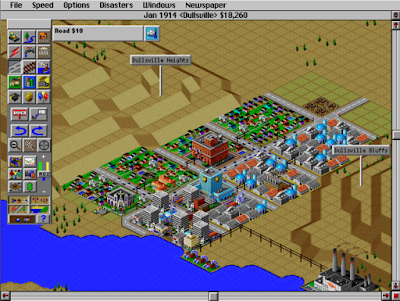 Oh God, why is nothing interesting happening in this goddamn city? I saw one house spring out of nowhere before again calling it quits. Whatever I did seemed to have such little impact in the city that I have to wonder what the point of employing me to spruce up Dullsville was.

I am doing something wrong? Am I impatient? I'll go with 'Yes' for both to save time, but this shouldn't be my first reaction with SimCity, should it?

I turned to YouTube to see someone get going properly and was a little annoyed to see a city emerge before my eyes - just like I had been lead to believe was possible - in fewer than five minutes. After twenty-five minutes, it looks marvellous. Although, I would have done it differently...

You can learn a lot from seeing other players' cities, and watching how they go about getting things done. If there was a tutorial I missed, I'd hope it went through some of this stuff.

When it goes right - when the city you create grows, demanding this and that in order to develop again and again, SimCity 2000 is like a slow release drug or something. "I'll just build this bit. Oh, neat, these guys have arrived, let's check what they need. Ah, look at that - if I hook you guys up like this..."

I want to spend time designing and creating cities, both in SimCity 2000 as well as getting back into Cities Skylines and even hand drawing a ye olde worlde mappe for fantasy lands that don't exist. Creating something is thrilling, but if you're hung up on starting...

SimCity 2000 gives you scenarios to kick start your game. It gives you all the tools you need. It adds to the previous game by including specific buildings with their own roles in the city - schools and prisons, a vast choice of power plant options, all kinds of transport networks. SimCity was great, but let's add this, and this, and that, and some of these...

SimCity 2000 has plenty to sink your teeth into - if you can get stuck into it. Maybe one day I will.

The newly introduced library comes complete with an essay written by Neil Gaiman.