How could I not know of Daytona USA? Literally, how could I have not come across this game in any form, at any point in my gaming history? It's the racing game that did 60fps texture mapped polygons and did them pretty damn well. When it is in motion, Daytona USA looks fantastic - bright and colourful, and arcadey without being offputting. When it's a still image, it doesn't look like it came from the early 1990s.

Daytona USA may only offer a basic racing game, albeit one with drifting, damage and slipstreaming, but it's one I want to dive right into and play right now. 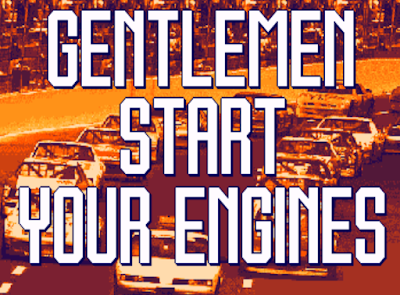 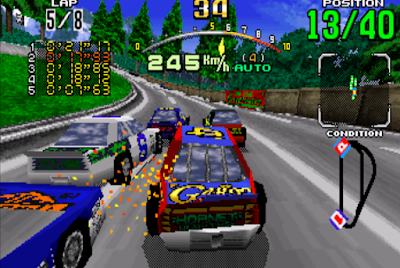 Do you know what's not so great about emulation? Sometimes, it just doesn't work. Maybe it's the game, maybe it's the emulator, maybe it's the problem that exists between the keyboard and the chair. Whatever it is, sometimes it'll be far from perfect, and that was my experience with emulating Daytona USA.

The go-to home console port of the time was supposedly the Championship Circuit Edition on the Sega Saturn, so I fired that up first, immediately spun out onto the grass and couldn't find the accelerator button - to the point where it does not exist at all, I swear. I've no idea what was going on there. 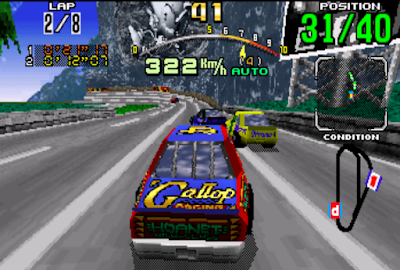 There was much more luck to be had with the first Sega Saturn port, except that it ran so slowly that it was closer to 6 frames per second than 60 (not that the Saturn port ever matched the original frame rate of the arcades, but still).

I could race, though, and race - very slowly - I did (the accelerator was definitely mapped to the controls with this port - no idea what was going on with the Championship Circuit Edition). The controls weren't the greatest, what with the lag and the frame rate, but a racing game is a racing game, right? 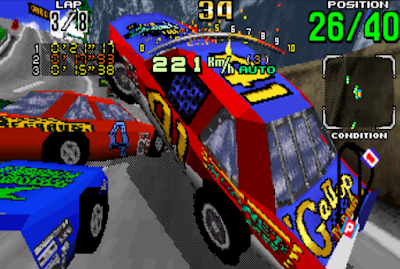 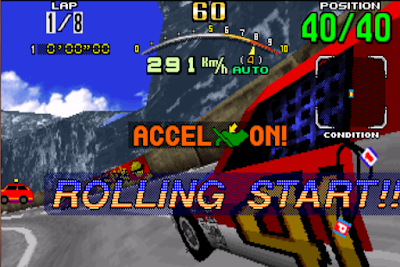 While I've been showing practically nothing but screenshots from the Saturn port (which was mute, too, by the way), I have seen the arcade Daytona USA and it is a sight to see. So many times we can say that something has to be seen in motion to really get what someone is saying about a game, and this is another of those games.

That and you get to hear Japanese men sing, to some extent, in English, which is worth a listen to. Perhaps not a reason to play the game, but it's part of the Daytona USA legacy now, so deal with it. 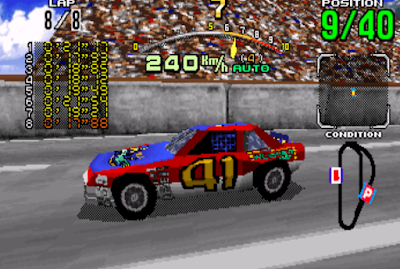 Should I ever have the time to really nail down the problems I've got with Saturn emulation or emulation in general, I ought to try Daytona USA out again - properly. Then again, I should try to play the arcade version more so than the Saturn. In fact, I could drop a wad of money on the PlayStation 3 release, but then I'd have to question whether Daytona USA is worth that money, knowing we're in the age of VR racing.

That's a question, isn't it? Daytona USA is this hallmark in history for the racing genre, and here I am daring to suggest that it's time has come and gone, VR has taken over. Daytona USA probably looks better than VR at this point, even 20, 25 years later.

If you get the chance to play Daytona USA at its absolute best, then have a blast. It's like Virtua Racing but better. Oh geez, look - even Sega naming conventions are calling Daytona USA better than VR...

Hop in, buckle up, pedal to the metal for the rolling start.

I have managed to find the accelerator in the Championship Edition, and have managed to emulate it at playable speeds. Still crashed near instantly though, and veering off to the left whenever you take a left turn is an issue, especially on a circuit with only left turns.

PSN Sales mean that a Daytona USA port is now mine for the playing, and I can confirm that the accelerator is mapped to R2, and it will be held down quite far, quite often.

Races are quick, and the controls, while simple, demand a bit of skill. If you don't slow down, you'll hit a wall or a car and will lose speed, and a lack of speed will mean the difference between a handful of places in the results, let alone one place. If you don't turn just right - and they're sensitive controls, so watch out - you'll either wind up on the grass, where you'll slow down, or you'll drift so much that you'll end up spinning your car, which usually results in hitting a wall or a car, or running off the track, all of which slow you down.

Daytona USA wants you to go fast, and you're punished when you do something else. In the Arcade mode, you need to keep hitting those checkpoints in a timely manner, else your race will come to a grinding halt, which did happen to me but I was struggling to make my way through even half the field of racers on the twists and turns of the track.

With practice, of course, these problems go away, and Daytona USA becomes a racing game that looks and feels pretty fast. It still looks worse than the arcade version though, which may come as a surprise.

If you don't want to look at things, you might want to sing things in the Karaoke mode.

Even the developers had trouble with the Sega Saturn port, having to draft over developers from other teams to help finish it.