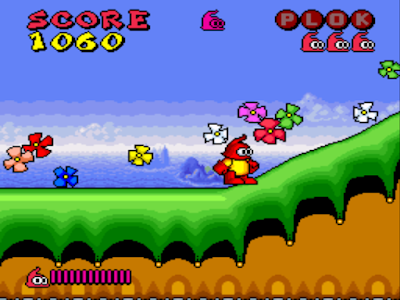 Words are hard to come by when Plok is on the screen. The 1001 entry for this title mentions how everyone and their dog wanted their own mascot, a la Sega and Sonic, but Plok came to that particular party too late. So late that he might as well have been lost to history, but here he is, walloping fleas with his giant cartoon fists...

Just what is going on here? 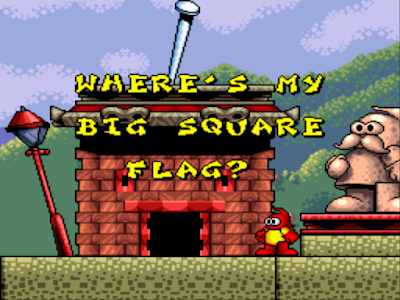 Despite all appearances, Plok isn't a game for kids. It's not a game for adults, either, though the difficulty selection does seem to suggest that I'm more like one set of players than the other. 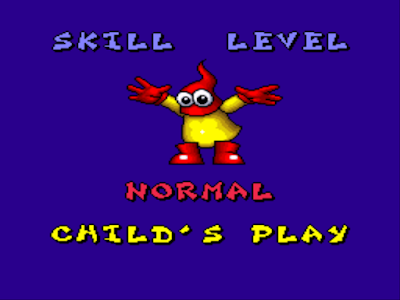 Plok is a side-scrolling platformer where you obliterate fleas with your flying limbs in an attempt to get your flag back from the thieves who took it, only to learn that it was all a diversion for an invasion of the land of Akrillic or something. I think that's right. I'm not really interested in Plok's plot if I'm honest. 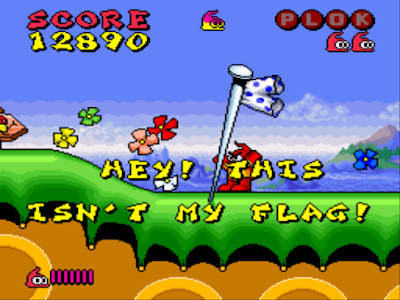 What is of some interest, though, is that Plok is both a clever and tricky little game.

That may be presenting the wrong idea to those of you who haven't played it yet, so to clarify, it's clever in that Plok uses his limbs as weapons, kinda like Rayman would, but they can also be used to pull switches from a distance, only you lose them, and have to hop about the levels looking for them - all the while haunted by the difficulty. 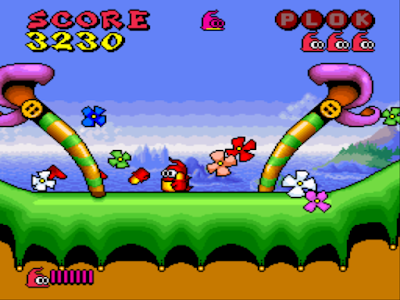 Again, haunted isn't the right word. Plok's difficulty is tricky because I found myself thinking "I can tank this section" only to find that, no, I couldn't. Power-ups or not, I fell into the trap of something looking easy but being difficult once again, and after too many silly mistakes I just didn't want to play again. 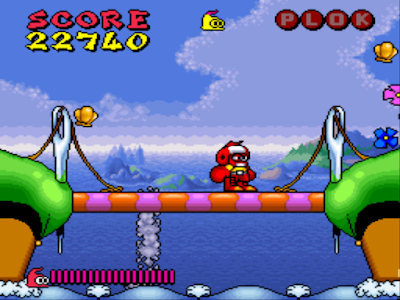 It makes for a bit of an entertaining watch, though. Plok doesn't hold back on his thoughts - though he does keep things family-friendly, even when in heated frustration with everything that's going on around him.

The subtitled musings of our titular hero is just a small part of the game, however, and I don't find it enough to keep me going. There's a character here, and he's not what you'd expect if you were to look at him.

Plok is both a lot of what you'd expect - bouncing around collecting seashells - and a lot of what you don't - Plok getting not just annoyed, but angry at the plot. If that's your thing, go play Plok. I'll pass. 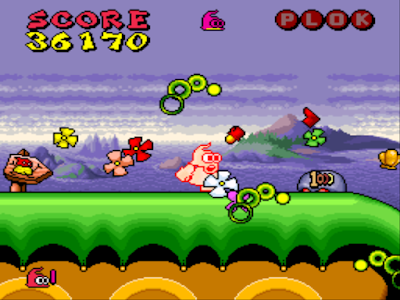 Shigeru Miyamoto - that Shigeru Miyamoto - expressed interest in working on Plok in some form. He didn't, with developer Ste Pickford - of those Pickford brothers - guessing that he didn't because the similar Yoshi's Island was in development around the same time.