Greetings from the USA. 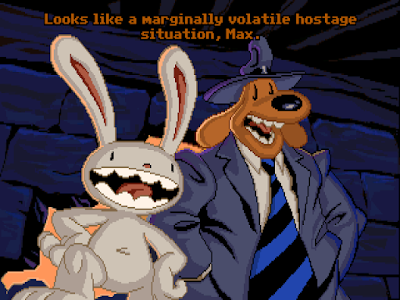 If you were to ask me what Sam and Max look like, I could at least bluff some knowledge of the two - a dog and a rabbit. What do they do? Maaaaaybe cops or something? I don't know too much about them beyond that.

So, it was about time I finally saw who they were in Sam & Max Hit the Road, a point and click adventure that sees our heroes search for some escaped carnival attractions. Seeing as Sam and Max are part of the 'Freelance Police', that must surely mean there's more to the story than meets the eye.

Can we find out what's going on without looking up too many hints this time? Haha. Ha. Hhhyeahh... 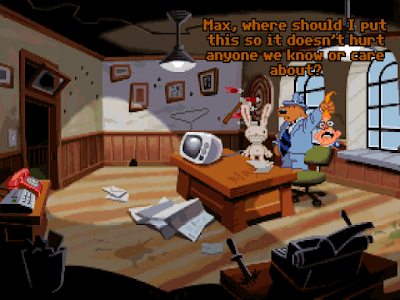 Sam & Max take no time to impress, crashing through the wall of an impressively drawn cutscene to set the mood. The graphics are top-notch, and the writing can more than match it, with Sam and Max quipping about their lives, referencing in world events and nodding to more meta content, like commenting on the credit sequence. 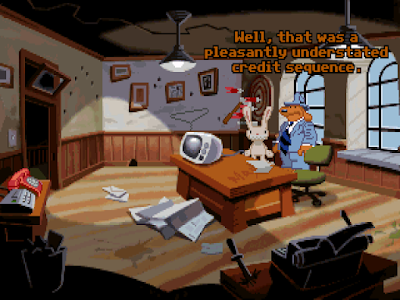 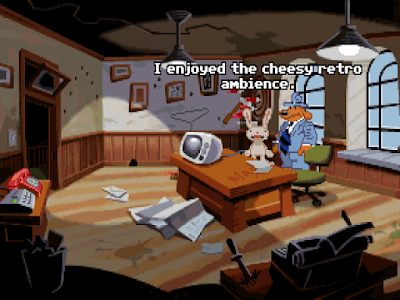 There's much more to Sam & Max than a credit sequence and self-referential humour, however, and it's all on display. This is yet another LucasArts title, where they've improved again and again on the artwork and the writing, but more importantly for me, the interface. 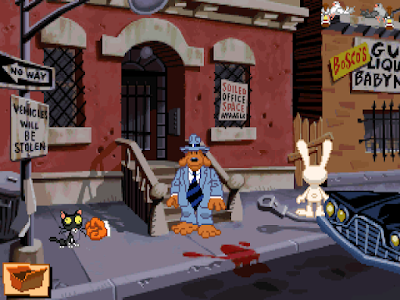 Gone is the list of verbs choking the bottom of the screen, to be replaced with a multiple-use mouse pointer. Verbs, like 'look', 'talk' and 'take' can be cycled through with the right mouse button, before confirming on an object with the left. The icons even change to give you an idea of whether something can be talked to or not, for example. 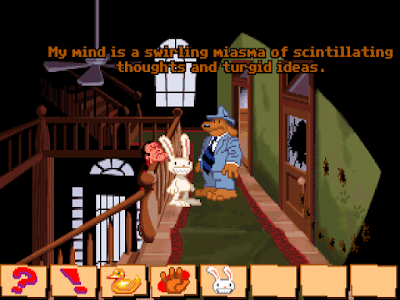 Eventually, even this helpful time saver got annoying. The pointer is rendered so large that not knowing what you're pointing to can result in you going to the wrong part of the screen, or triggering an audio clip you've already heard. Is it a game breaker? Of course not. Do you know what is a game breaker? Sam & Max being a point and click adventure. 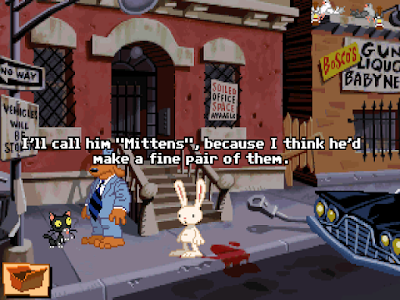 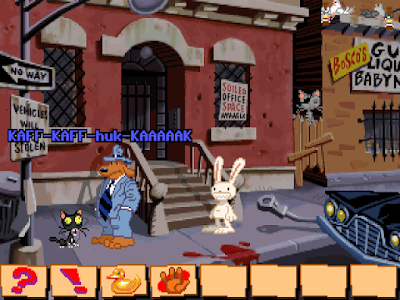 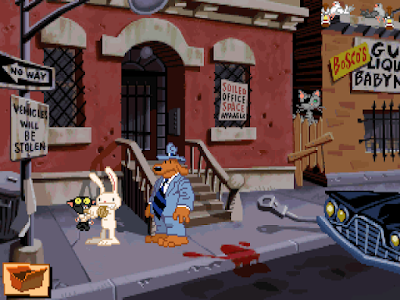 These guys are entertaining, but I have no Goddamn clue what to do with them at any point in their adventure, and I don't have the time to bash my head on the desk trying to work it out. Even with the hint book, which comes complete with a walkthrough written in the form of Sam's diary, I'm struggling to follow along, with both the plot and game. 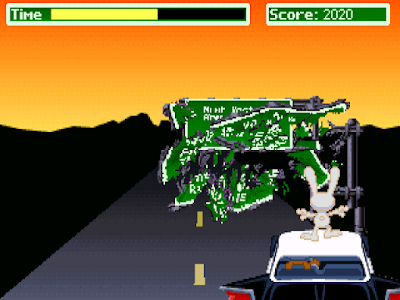 And what's with the mini-games? They were included as a way to allow players to take a break from puzzle solving, which is fine by me, but what is this one even? Dodging freeway signs for what reason now? Why are you car surfing in the first place, Max? 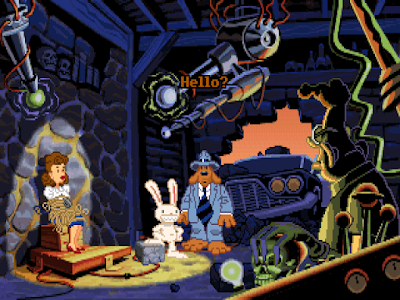 I've watched Sam & Max Hit the Road, and I don't know what to make of it. It seems short, but it's packed full fo wonderful art and animations. No idea what the gameplay is like. Is is hard? Are the puzzles monstrously tricky? The manual says it just wants gamers to have fun. I had fun. Then I got stuck, gave up and went to YouTube.

The characters are unquestionably worth playing the game for. The game, from what little I've seen, is point and click, and all that comes along with it. For me, that's almost a death sentence for a game.

Have a bash at Sam & Max Hit the Road. May you have a much better time of it than I did (which is easy). 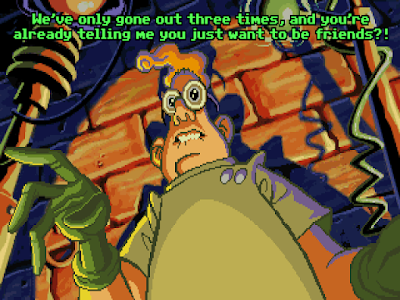 The rights to the use of Sam and Max as characters were given to Steve Purcell on his birthday by his younger brother Dave, who had created the duo in their youth - Dave trying to start a serious comic strip, and Steve completing the unfinished attempts with humorous parodies.