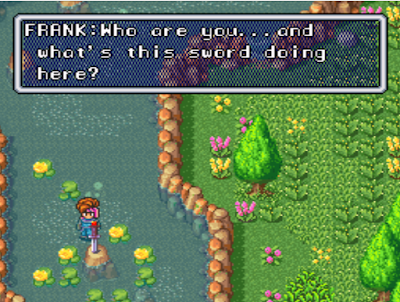 The problem with embarking on a challenge like this is that the sheer scope of some games means I'll never get to really know what they're about, because I'll never have the time in the world to sit down with them for hours and hours and hours on end, especially if they're Role Playing Games like Secret of Mana.

The world is in peril, an epic quest is thrust upon you, how will you manage to vanquish evil and save the day? I'll never know... 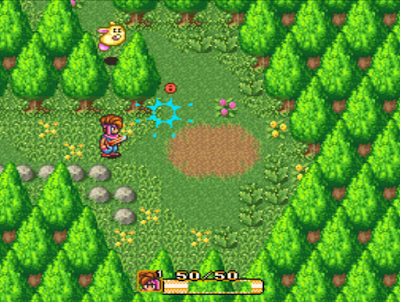 Secret of Mana, while looking a lot like other RPGs of the mid-1990s, plays a lot differently in that it all takes place in real time. There are no turn orders to work out and strategies to plan and set up in advance - what you see on the screen is what you've got to deal with there and then.

Your first obstacle is a bouncing little Rabbit-like thing, which seems an easy enough problem until you find the actual first obstacle of the game: your attacks are useless if you keep spamming the attack button.

Down the bottom of the screen is a stamina meter of sorts, and after the first swing of your sword, it starts counting up to 100%, at which point you can attack again. You can attack earlier than 100%, but you'll do so with reduced damage, and the counter resets to 0. Thus, if you spam the attack button, you do less and less damage to your opponent.

"Well, that's easy, just don't spam". Yes. Yes indeed. How many times did I attack, miss because I was too far out, then immediately attack again through instinct gained from decades of video gaming without such stamina meters?

If you miss that first attack because you're out of range - easy when you're learning the finer points of the game - you've got to wait for a given length of time that sometimes feels agonisingly slow, despite it being just a second or two, before you can try again. It doesn't sound like much, but it threw me off my game plan far too often.

I'd be really whiny if that was all that caused the initial irks I had with Secret of Mana, but no, it's not the end of the world... 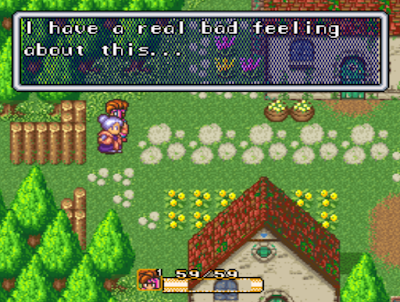 ... I can barely read the text either. 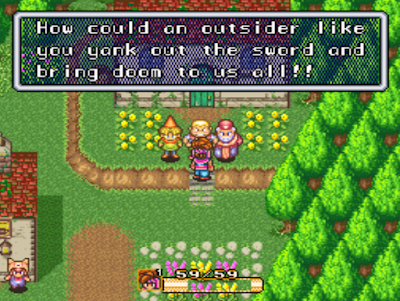 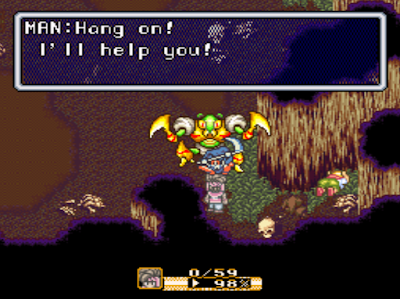 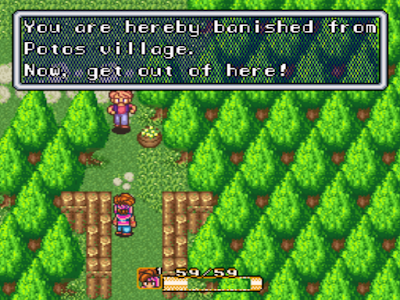 After running back to town, I got blamed for all the monsters that have suddenly appeared, fell down a hole into a boss fight, got killed in said boss fight, then banished from the town entirely. Thanks, guys. I'll just bugger off on this quest on my own, yeah? Maybe I'll see you all again when I've done... what, exactly? 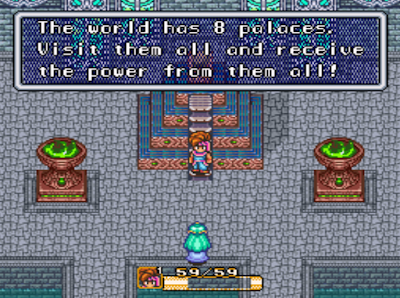 Recharge my new Mana sword with power from 8 palaces scattered across the world map. At least I can traverse the map via giant cannon, right? 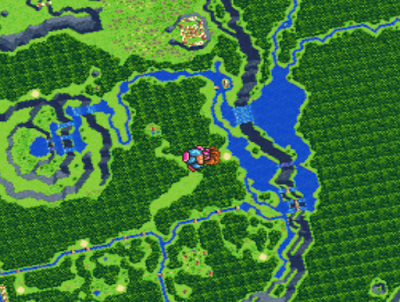 Yes, proving that there is some fantasy in this RPG is the fact that not only does shooting yourself out of a cannon work as a method of travel, it's endorsed by some guys who want to make it one of the primary means of travel through - or over - this place.

After using said cannon to begin my quest, I headed for the belly button of the world - a cave of some sort, I believe. 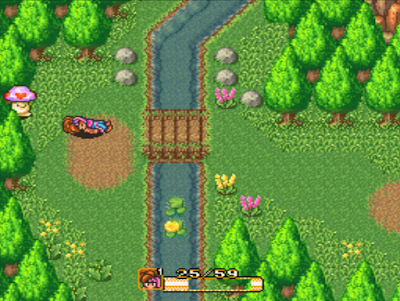 Until this asshole showed up, shoving his mushroom ass in my face, knocking me unconscious and eventually killing me. Game over, thanks for playing, hope you saved. I didn't.

So that was my experience playing Secret of Mana. How about watching it instead?

Watching it yields an awful lot more information. Like many an RPG, you'll be travelling with a party in Secret of Mana, and not only can you switch control of those members as you see fit (leaving the AI to those you aren't in control of, risky though it may be), you can also use additional controllers - and therefore have additional players - helping you on your quest.

Juggling the inventory of three characters is one thing, but having three people manage their own inventories, and attack strategies, while watchng each other's back, suddenly makes the Secret of Mana stand out amongst the crowd.

I have no idea how enjoyable it is to grind through an entire RPG with two or three players, though I suppose there are people out there who wouldn't mind trying it at all, especially when the genre almost screams single player. Why not try a game that tries to do something different?

The plot, from what I followed, was a bit generic, and while you can level up characters, weapons and magic skills, you'll not really be doing much more than hitting enough things to raise your stats so you can hit bigger things. With no turn-based combat, the mechanics have to be somewhat simple, less you have players pause the game ever two seconds to swap through spell lists or whathaveyou.

Secret of Mana probably sounds better than it looks, and I say that largely because it looks like any other RPG of the era, but it does sound pretty good. It's worth a look, it's worth a listen, though I don't know how much you'll get out of it if you're not into the genre or the mechanics.

I can't see myself trying it again anytime soon, though my 'attempt' is hardly worth writing about. Next time, I might save before I die. Who knows?

The game was originally planned for release on the SNES-CD, the ill-fated Nintendo-Sony partnership project. The companies went their separate ways, Secret of Mana had a rocky development to cram it into a cartridge instead of a CD, and the developers took the decision to jump ship to the newly introduced PlayStation for their next projects - the Final Fantasy sequels.