Having not had a computer for my early childhood, there is no possible way that I'd have caught The 7th Guest in all its original two CD glory - a game so big and detailed that not even the vast storage space of a single CD could contain it.

Joking aside, this game was one of the first pieces of media to really push for consumers to buy CD-ROM drives and welcome the future, and for video gaming (according to developers Trilobyte) that meant mixing pre-rendered 3D backgrounds with live action characters.

Kind of like Return to Zork, I guess, but better. Personally speaking.

We are a disembodied spirit in a spooky old house. What horrors will we witness? What secrets will we uncover? What will we rate the acting out of ten? Let's dive right in. 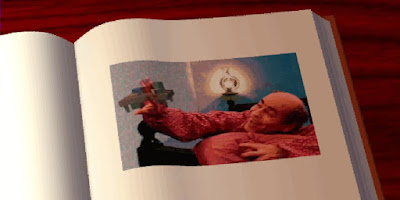 After storytime, where we learn of the history of the house's owner, a drifter turned toymaker by way of hallucination called Henry Stauf, we're dropped into the main hall of his mansion, bought and paid for by toys that killed people. Not that that was proven, or anything. At least I think that's the backstory.

Anyway, we're briefly introduced to six guests who have all been invited to spend a night with Stauf in the house, and if they manage to fulfil his task, they'll be rewarded with whatever their heart desires.

Naturally, it's a bit more nefarious than just staying in a house with a bunch of strangers, but you have to uncover that by investigating the house and solving puzzles. 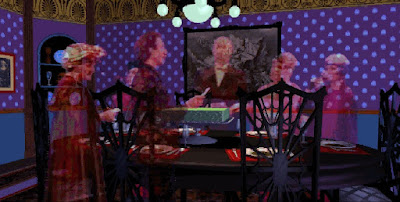 The first I encountered was the cake puzzle, where each guest had to have a slice of cake that consisted of two skulls, two gravestones and an equal amount of whatever was left over. It was a piece of cake - once you figure out what the various mouse pointer icons mean.

I had a feeling that this might turn into a trial and error based game, and the pace was not on the speedy end of things, but I persisted. 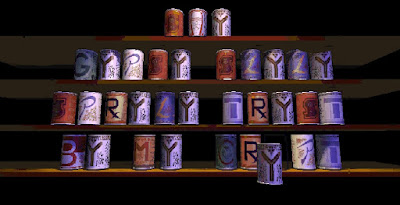 Sometimes persisting isn't wise. The second puzzle I encountered was the tin can puzzle, which required multiple trips to the in-game library in order to be solved. The inclusion of a magical book that helped you on whatever the previous puzzle you attempted was is a damn good idea. Not having it as an inventory item isn't. Still, at least once you slowly walk through the house back to the library to read the ever-so-helpful hints you're teleported back into the puzzle to retry it immediately.

Incidentally, if anyone has successfully used the sentence 'Shy gypsy slyly spryly tryst by my crypt' in real life, please slap yourselves across the face.

After a short sliding block puzzle was the maze. Maze's aren't terrible, but I looked at a map of this maze after I'd brute forced my way through it to find that the exit is right next to the starting point.

I hope to God that was worth it because I didn't get any achievements for triggering the 'Feeling lonely?' sound bite umpteen times. No, Stauf, I'm not feeling lonely walking into yet another dead end. In fact, if anything, I'm feeling like you're kinda dragging out the gameplay a little here.

I mean, even this guy's bored to death...

It does eventually lead to a puzzle involving coffins opening and closing, like in a game of Merlin, The Electronic Wizard (had to look that one up, otherwise, I'd have gone with Lights Out).

Games with puzzles are probably tricky to get right because players are bound to be stumped by some puzzles but breeze through others. After this grand maze locking off the crypt from trespassers, I completely fluked the solution to the puzzle by simply testing coffins one by one in order to see which other ones they'd activate.

Alright, yes, that's the point in the puzzle, that's how it's solved, but still. Twenty minutes (or so it felt) of mazing followed by twenty seconds of coffins. Not the best payoff, that. 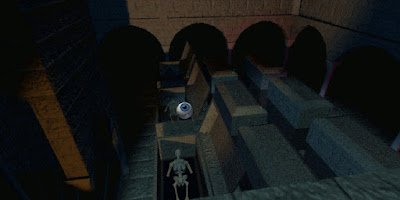 It did remind me of the joy of The 7th Guest though - the live action segments.

Scattered throughout are bits and pieces of the story with a cast of characters - a couple who are perhaps growing apart, a lady who wants to reclaim her youth, a magician (in full costume) and more. Each has their own reasons for being here, but we soon realise that these people are long gone, as more of the fateful night is revealed to us, clip by clip. 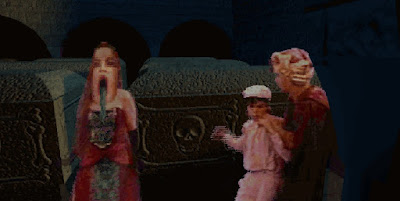 Having not completed much of The 7th Guest, I don't know the details beyond what I've read about it, but Stauf was quite the evil bastard, put it that way.

I was half expecting - if not fully expecting - The 7th Guest to be off-putting. I knew I'd likely have trouble with some of the puzzles, but it was the promise of live-action that was the potential deal-breaker. It can either look good or look anything but, and while it doesn't look good, the developers have done wonders with it. The characters are dead, so having them fade in and out and look ghostly and not-quite-involved with the background actually works alright. It worked enough to keep me invested, at least.

For a while. Not forever.

I did tire of The 7th Guest. My time spent in the maze didn't help, and not wanting to go back to the library time after time meant a puzzle was either given the Google treatment or abandoned.

I might come back to it at some point. As I say, it surprised me by actually managing to retain my attention, so that can only be a good thing. If you like hammy acting and horrific puzzles, you might find yourself becoming the next guest in The 7th Guest.

The puzzles are derived from 19th-century puzzle books because some of the puzzles Trilobyte wanted to use originally were copyrighted.