The party has fallen. 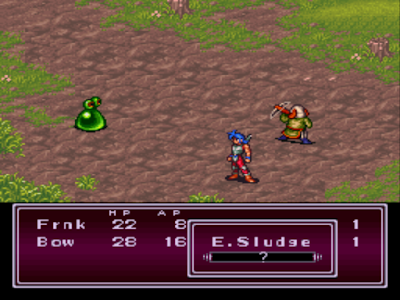 Role playing games are quite decisive, aren't they? You can love one and loathe another. You can hope one goes on and on and hope another just ends already. With the prospect of tens of hours of potential playtime ahead of you, you'd hope that you could get some kind of idea which type of RPG whatever it is your playing will turn out to be.

With Breath of Fire II on the SNES, it wasn't long before I knew where I stood with it - or rather where I fell face first onto the deck with it. 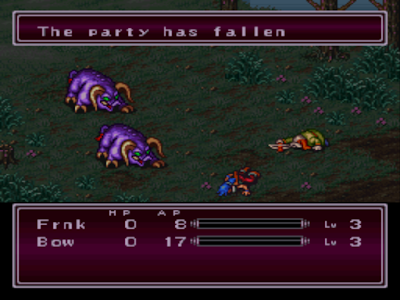 A greyscale flashback kind of opening introduces you to the world of... wherever we are... where something happens and then you're snapped back to reality. Or not, as there's some scrolling text to fill in the blanks if you can read past the font. 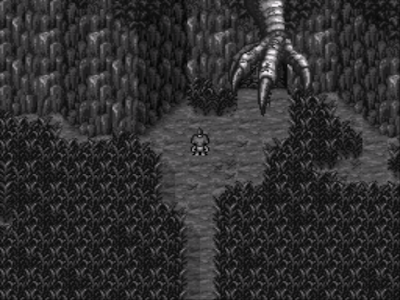 I wish I wrote better notes for this.

So you wake up with a dog called Bow or something, and we're good buddies so we go adventuring together to look for a pig. I think. I don't really know, because there's only so many random battles I can take before getting bored, and I'm barely outside of the first town. 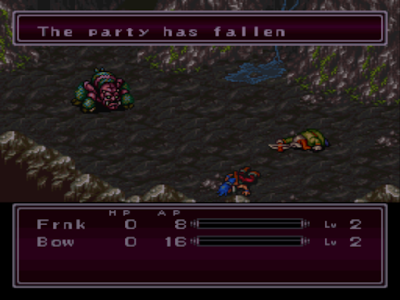 I'm either under leveled, or stupid, or both, but I was not having a good time with Breath of Fire II at all. My time was spent attacking, dying and respawning back in town, and that got old pretty quickly.

The story didn't grip me, the art was alright, but again I wasn't captivated by what I was seeing, and the music was indeed music.

There's no chance in hell of me getting anywhere into this game on my own, so off to YouTube it was, which allowed me the chance to see Breath of Fire II in all its glory.

It's pretty good to look at. In places. And there are some interesting mechanics, where different party members have different overworld skills, meaning different methods of traversal over the map, or the option of playing different mini-games to earn some coin and pass the time, I assume.

I also read that you can make and populate your own village, which reminds me of Dark Cloud now. I'd rather play that instead of this. Not a fair comparison, though, really.

Yes, I can see how you could be interested. Plenty of characters, many different ways to go about your journey... but isn't that what RPGs should have by default?

Doing so has freed up sooo much time that I can get back to the important things in life - scrolling absentmindedly through Facebook looking for click bait to share with everyone.

Bow is called Boche Doggy in Japan. In case that ever comes up in a pub quiz...