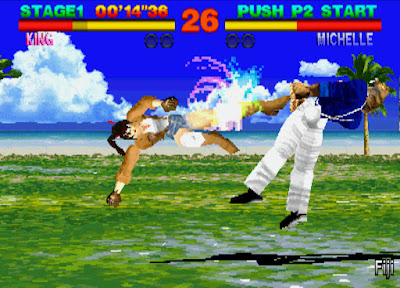 You always remember your first, don't you? While it probably wasn't the first fighting series I ever played, the Tekken series is the series that I have the most fun with because I grew up with Tekken 2, bought for me by my grandmother.

As such, it is in Tekken that I feel at home, control-wise, timing-wise. It is in Tekken where the best characters can be found. It is Tekken that gets chosen over Virtua Fighter, Dead or Alive and probably even Street Fighter.

But I haven't played the original, in the arcades or on the PlayStation, and I'm eager to find out if I can slot right into the rhythm of the game - to see if it all comes back to me, like riding a bike or suplexing a native American woman. 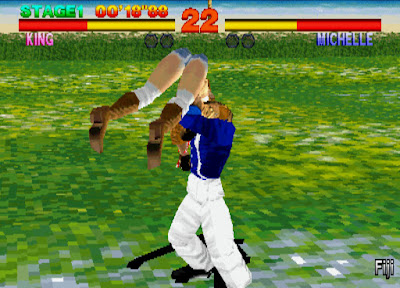 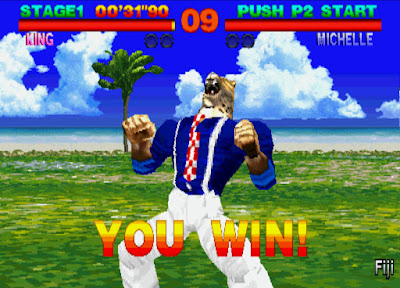 Ooooohhh, this is going to be good. 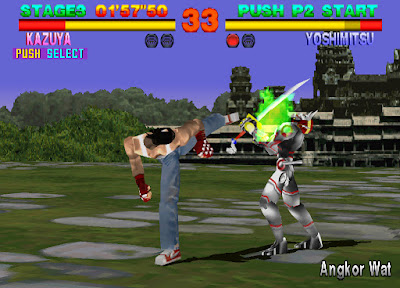 Why does Tekken feel so good? There's a weight about this game. Movement feel solid and chunky, yet animations for kicks and punches are so swift and decisive that it results in a heavy hitting bout between characters intent on pummeling the hell out of each other. 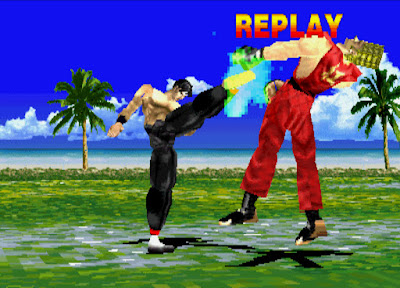 I'm playing the PlayStation version via emulation, and even on an Xbox 360 pad Tekken feels like the Tekken from my distant past. Face buttons are assigned to limbs and strikes can be aimed high or low, coming from the floor or at the end of either a gentle little bunny hop or a massive, otherworldly leap into the air. 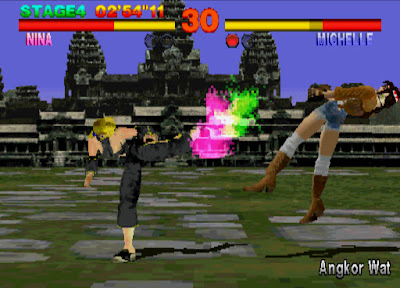 Blows that connect with your opponent result in flashes of light - as if the visual cue of a body flying backwards like a ragdoll isn't enough of a hint - as well as almost monstrous crunching and smashing sound effects. It's like you stop being fighters and turn into superheroes for a thirty-second contest that will see one of you hit the deck for good. 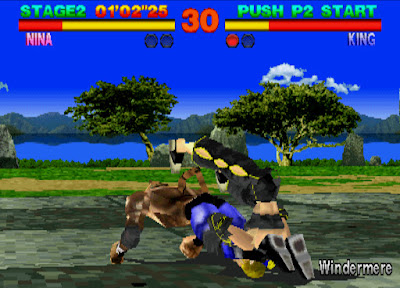 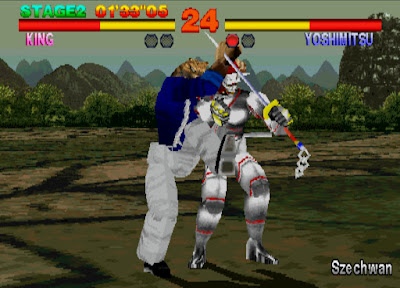 As well as strikes, each character has grapple moves to inflict larger amounts of damage but require you to be within the range of everything your opponent can unleash upon you. These moves look awesome, but they do tend to show off the inner workings of the engine in the kinds of ways that the really nitpicky critics would point out - clipping issues, janky animations, an inability to even see what is going on unless it's in motion, rather than a still image... 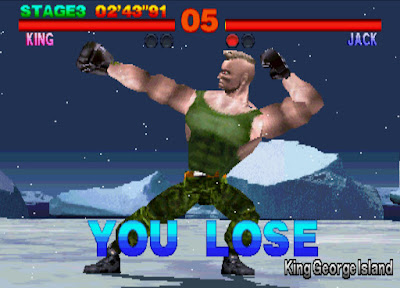 The game isn't without its quirks outside of the animation, either. My personal gripes were mainly that I wasn't completely used to the controls or the characters, with notable grumbles being made whenever I jumped far too high to be useful, usually over my opponent and leaving my back exposed for a quick attack. As each character comes with their own move set, they'll require some changes to your playstyle to get the most out of them. Some characters I just couldn't get to grips with, but other characters I'd do fine with until the third fight. 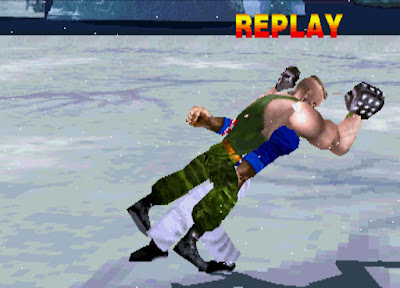 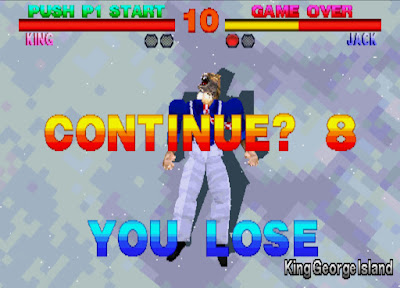 For some reason, I choke during the third fight of anybody's run through the list of opponents. It's weird, probably related to taking screenshots, but there is a difficulty setting should you want to tone it down. 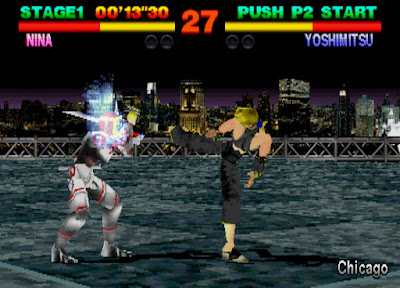 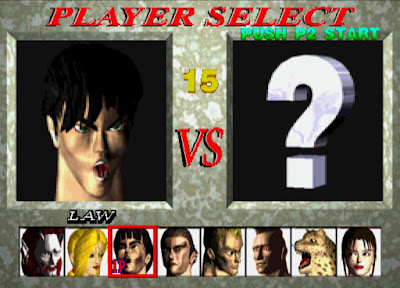 Character models look pretty nice, considering the early state of the technology. Not too sure about Yoshimitsu's model though, and the less said about Law's face, the better. 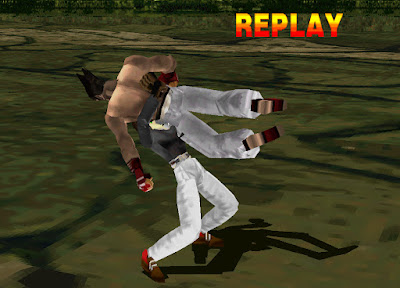 Tekken is a game where nothing matters but the fighting. The graphics don't need to be brilliant, but passable. They are pretty damn passable, in fact, with both models and backgrounds looking much better than Virtua Fighter.

On top of those graphics is a previously mentioned layer of sound that works wonders for instilling a sense of weight and power upon whatever is happening on screen at the time. Everything works together to make Tekken a heavy hitter. 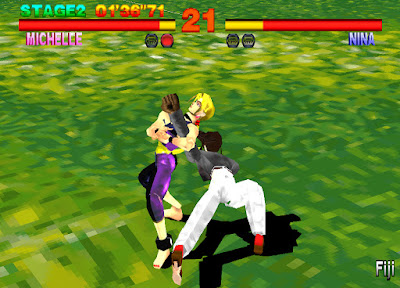 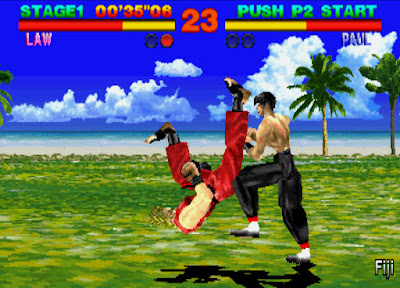 As you'd expect, a two-player option is available to smash your opponent in the (digital) face, and while the roster may seem small by today's standards, there's enough depth for you to find your favourites and learn how best to use them.

If you're a fighting fan or not, Tekken will give you a good time. If you're more familiar with another series, it might take a little time to adjust, but that's true of entire generations of games and shouldn't be an excuse to not play, so pick up a pad and mash those buttons already. 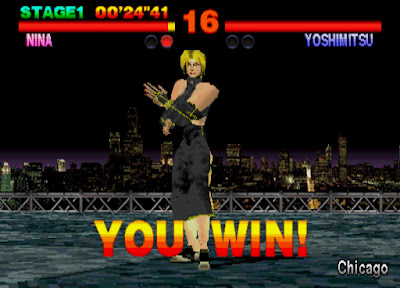 Originally developed as more of a test case than a game, it wasn't until Namco brought some ex-Sega developers into the team that things took off for Tekken - those former Sega developers had just brought Virtua Fighter to the world...