Take your... { ... and hammer the fire button as you speed around psychedelic shapes in synesthetic overload. 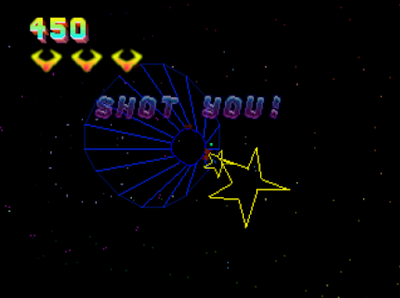 Or, in my case, crawl around the shape at a blistering few frames a second, getting absolutely none of the action and even fewer notes of the music. Despite being ported to a fair few consoles, I'm just getting no luck with this game. Yes, emulation can be like that sometimes. 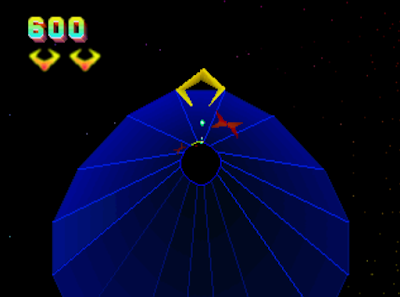 Emulation woes aside, though, Tempest 2000 is a sight that must be seen (at its recommended frame rate) and heard. By today's standards it might be a little too much, a little too loud and garish, but what it actually is is a massive celebration of the original title, and of the arcades themselves - their saturated colours, their deafening music, and their absolute love of huge scores and power-ups.

Tempest 2000 adds what are perhaps obvious power-ups - the ability to jump, or a screen cleaning attack, for example - but this is a game where you have one very clear focus, and you don't need extra content for the sake of there being more stuff for the player.

You rotate around a tube shooting things coming at you from the other end. Just like Tempest, only there are more designs of tube - many that aren't even tubes at all - and they're all positively glowing with colour.

These blue screenshots from the first stage of the Sega Saturn port are obviously not a good example of that... 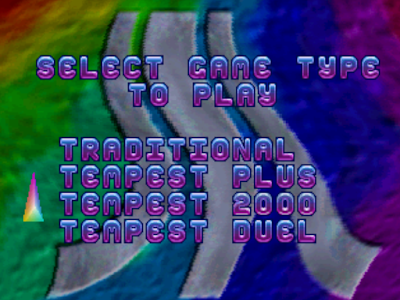 I've no idea how any of these modes play, specifically, or indeed how Tempest 2000 plays. Or Tempest itself. I could fire up TxK again for a quick Tempest fix, but my PS Vita is... somewhere on there, I suppose? Hope so. Might need it at some point.

You largely know what you're going to get before you go into Tempest 2000, and if you don't then the first few levels will certainly give you a hint. It's going to be a little hectic, you are going to make mistakes, your senses will be bombarded and you will play one more time, just to see if you can get a little bit further.

It is arcadey to the extreme, and there will always be demand for this kind of game from someone.

Jeff Minter took on the task of bringing an updated Tempest to the Atari Jaguar because it was one of his favourite games, but despite the work put in, he was told that Tempest 2000 didn't do a good enough job of showing the capabilities of the Jaguar.

I don't see too many Jaguar games on this list...