How weak you are! I might kill you as well as "tofu" with my sword!


It's 'showdown', right? With a 'w'? I'm not the only one to always type it correctly before realising that, no, Samurai Shodown II drops the 'w' because... reasons.

True to it's misspelt name, though, there are Samurai's on show here, and they are down to fight. It's like Street Fighter with weapons, and that can't be too shabby, can it?


Well, I can't say for sure because I've not yet been able to play it. But I have watched it, and I have some mixed opinions from my first viewing of this series (yeah - there's loads of games spread over the decades and across the platforms, and I'm aware of none of them).

Let's just get the obvious out of the way. It's translated. Badly. Readable, I suppose, but sensible is pushing it. It comes off as generic, and any story that's going on (not much, it is only a fighting game) is lessened because of odd phrases and sentences whose ends are cut off and stuck on the next slide of text. Minor grumbles, perhaps - it doesn't impact the gameplay itself, but it does detract from wanting to play it.

Which isn't a good thing to think, because from what I've read, Samurai Shodown II is the absolute must-play of the series, where the controls and mechanics of the first title were improved upon to the point of near-perfection.

You have three levels of attacks, light, medium and heavy, with both your weapon (usually a sword) and your feet (usually foot shaped). Using these attacks in combinations with jumps and dashes can make light work of your opponent, but badly timed attacks can open you up to a world of pain, putting you on the back foot - good job the defensive capabilities have been improved from the first title too.

Special attacks are present and don't appear to be easily spammed, and bouts are supervised by a referee of sorts, who I eventually got distracted by while watching. He's got two flags to represent each combatant and will raise the relevant colour whenever they score a hit. You know, because the on-screen effects, animations, drop in health gauge and meaty sound cues just aren't enough for you to know for sure whether you've hit your foe...

Joking aside, the sounds seem to come straight out of martial arts films of the 1970s, with all their schwings of swords and however you'd describe the hits of those swords upon an enemy. You'll know it when you hear it, which is good because I sure as hell can't describe it.

The usual 'haven't played, can't say for sure' applies here, but I think Samurai Shodown II needs to do more to win me over. It looks colourful and arcadey, with characters being clearly distinct from one another, but it can feel a little too over the top in places. I can't quite put my finger on why just that I get a sense that something should have been toned down eeeeever so slightly.

If there's the option to not see any English text on the screen at any point, that might make for a better game, because it really is hampered by that translation attempt. If you can live with it, great, go smash your foes with whatever weaponry you wield. For me, I ought to play it, but I'm in no rush to do so. 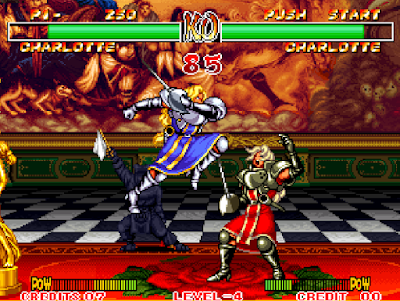 Not long after writing this, Samurai Shodown II appeared on Good Old Games, meaning I had no excuses to find out what it's like firsthand. In a word, difficult. 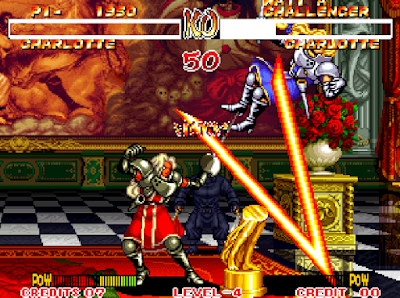 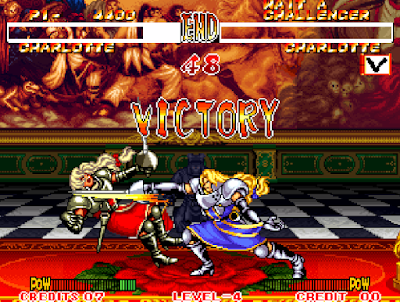 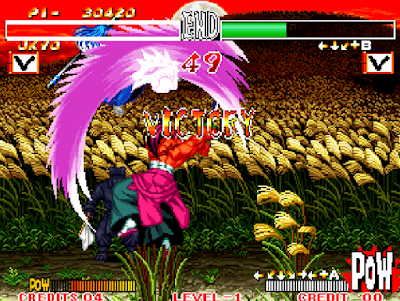 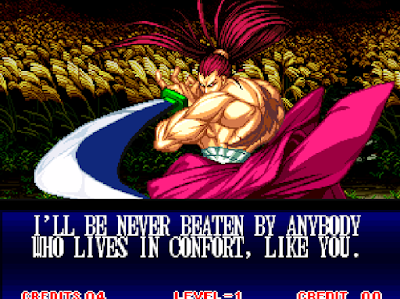 The game comes to us via the wonders of official emulation, and while the emulation is certainly fine for my needs, the interface sucks. But it did allow me the option of decreasing the difficulty from a too difficult 4 out of 9 or 10 or something to a much easier 1. And even then I met my match on the third stage of my run. 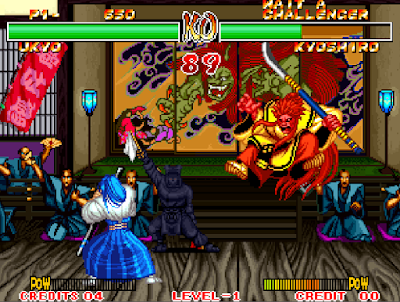 In my defence, I was largely button mashing with unfamiliar characters, and I was using the greatest d-pad on the market, found on the Xbox 360 controller (ahem). There is the option for keyboard controls but... well, no, thanks.

But, when I could make out the characters from the backgrounds, Samurai Shodown II wasn't too bad. I liked the little details of cutting through objects in the foregrounds of some stages but didn't like when I still couldn't see my character behind said object. I liked the inclusion of the special move inputs, but don't ever recall pulling them off. The sound was better, but sadly, I wasn't seeing much of the ref in the background. 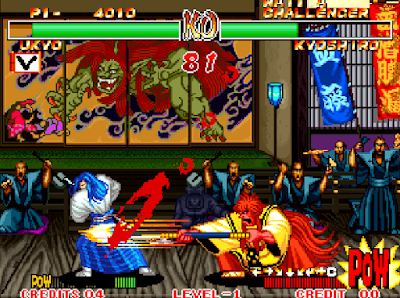 I would need to spend some time with this to feel more comfortable with my attack strategies, and I'm sure one of these characters is right up my street, in terms of move set rather than looks. Only time, and maybe a change of controller, will tell.

The roster includes an old monk no bigger than your granny called Nicotine Caffeine. No, I don't know why he's called that either.