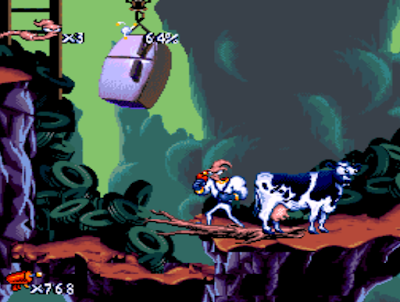 Earthworm Jim practically screams the '90s, doesn't he? In what other decade does a super suit fall onto an Earthworm, turning him into a superhero intent on serving some justice to ne'er-do-wells and spending some quality time with Princess What's-Her-Name? In no other decade is your answer.

Charge up your blaster pistol, whip your head back and forth and get ready to launch that cow, because I'm going down to the junkyard as a super worm. 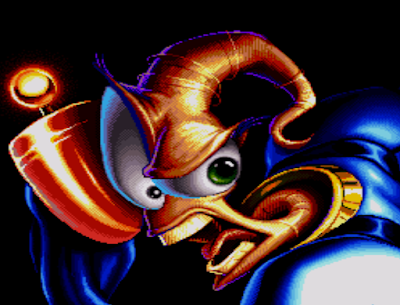 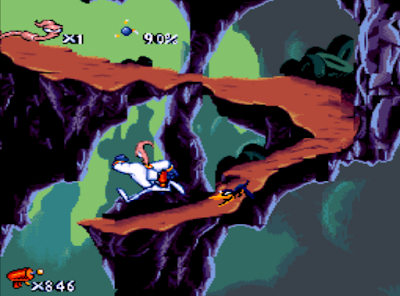 A massive part of Earthworm Jim being such a '90s icon - for some of us, at least - is the art style on display, especially the animation. Jim is over the top - obviously, for being a worm in a super suit - with a massive upper body somehow balancing atop stick-like legs. He is a comic book character, a cartoon, a larger than life superhero, and every frame of animation says so. 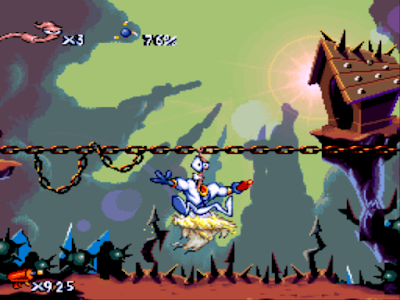 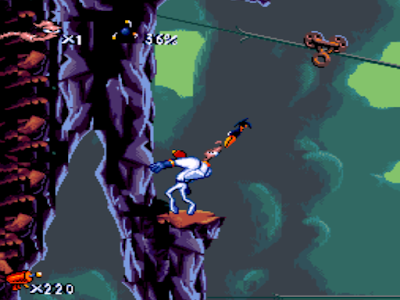 I was playing the SNES port, but no matter your home console of choice, Earthworm Jim is far better in motion than not. But what do you do while in motion?

Jim has a gun to fire in multiple directions, and a jump button to traverse the maze of a platformer that he finds himself in. It also doubles as a kind of glide button, where Jim frantically spins his worm body around like a set of helicopter blades. Of course he does. He also uses his head as a melee weapon, naturally. It's marvellous. 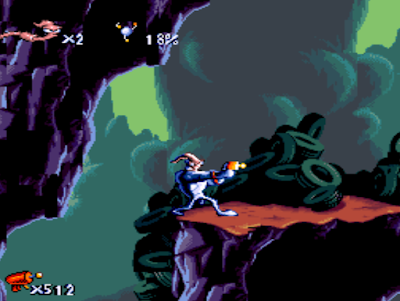 Marvellous, but not flawless. There is a health system at play here, which will allow you to take multiple hits before losing a life, and with the way the enemies flock towards you - and not just the birds, but the dogs too - you'll be losing plenty of health in places where you really shouldn't be.

Enemies don't just patrol but dive bomb you, hounding you until you've attacked enough times for them to be killed. If you find yourself climbing up a ledge, for example, or trying to grab onto a hook with your head, and are pestered by an enemy attack, more often than not it seems like you'll be taking that attack for a little while until you're able to finish whatever it is you're doing and get out your weapon in response. 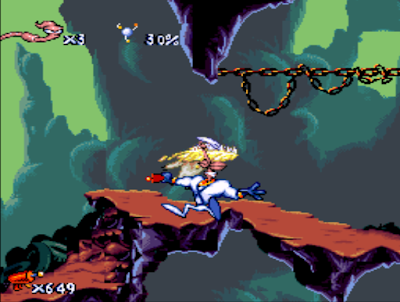 Little frustrations like this can add up, and on top of that is the previously mentioned maze-like structure of the levels. Paths are somewhat obvious - the things you are walking on or swinging from make sense, you can see them, but where they lead is anyone's guess. I haven't found the exit to the first level yet, which goes to show how good I've gotten with games these days... 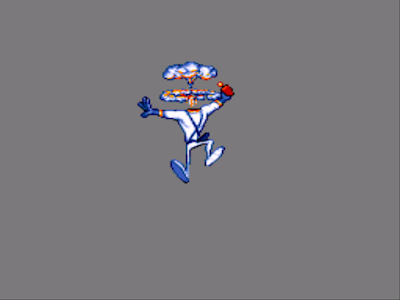 I had to go to YouTube to see what I was missing - both in terms of the vast about of game I'm just not capable enough of seeing, and the tiny little details in the animations that you just don't see when you're playing it yourself.

It's easy to see that Earthworm Jim is a blast. He is quite the character, with a unique look. His game is also similarly unique and full of character. There are moments where you can ride hamsters. There is a level that looks to be an insanely devilish escort mission with the happiest puppy on the planet. There is an underwater level that's timed and tricky.

So it's not all unique, but it really does stand out. It plays nice, it looks fantastic, and one of the few differences between home console versions is the sound quality, and that'll be up to you to decide between.

I'd like to have a better bash at this title somewhere down the line, but until then, I'll recommend you watch Earthworm Jim at the very least - the game or the cartoon series.

Despite there being a SNES port, it was the Sega Genesis version of the game that made it to Nintendo's Wii Virtual Console.