"Even the rocks do not recall."


Mario vs Sonic. FIFA vs PES. Mario Kart vs Crash Team Racing. Similar games divide players into defending one or the other, often til death. Well, not often til death, but gamers will argue nonstop over which is the better of the two, and will rarely switch their stance.

Ratchet & Clank vs Jak & Daxter: The Precursor Legacy was a popular one, with each cartoony platformer making a home on the PlayStation 2, and seeing a full trilogy emerge before the next generation of consoles would appear. But which was better?

I was firmly in camp Ratchet, having only played a brief demo for Jak & Daxter before making my choice. And I don't really know why I chose Ratchet over Jak. Probably the setting. Maybe the fact that Ratchet spoke and Jak didn't. Who knows. I haven't gone back to see what the other camp were playing ever, so this will be interesting, and I am looking forward to it. 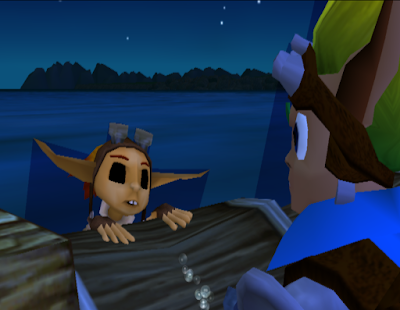 I have both the original disc and the Platinum rerelease of Jak & Daxter, so playing them on original hardware shouldn't be an issue, but as usual, I want to be able to show off these games, and so I try to emulate them to grab lovely screenshots every few seconds.

Jak & Daxter is a game that you can emulate, but... On my particular set up, I could more or less run the games but would encounter too much slow down, and characters didn't have eyes. 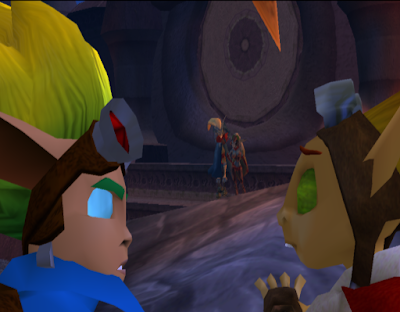 The best tweaking I could do would lead to characters having something for eyes, but still not eyeballs, and there would always be moments of slow down when too much was going on at once. Not that you'd know in screenshots, I suppose, but I want to enjoy these games if I can, and a game so full of character needs eyeballs, so I'm going to need to fire up old Faithful.

Jak & Daxter is the result of Crash Bandicoot trying to do a Banjo-Kazooie open-world collect-a-thon, and it looks marvellous. Naughty Dog, like Rare before them, seems to have a knack for squeezing absolutely everything out of a console, and their titles show it.

You are Jak, a silent teenager in a world of ancient artefacts scattered around the place in need of collecting before the menacing villains Gol and Maia unleash the power of the deadly Dark Eco. It is Dark Eco into which your buddy, Daxter, fell while you were on a mischevious night out, and now he has turned into a small, mouthy Ottsel. There is no way to reverse it, which he is surprisingly okay with. He is still alive, after all. Just a lot shorter.

You and he are, after some plot dumping, left to explore the world looking for eggs and eco and power cells and other collectables to further the story.

Based on my previous experience with Banjo-Tooie, you'd have thought that I would hate this type of game, but, when on a system with proper analogue sticks, the open-world platformer genre can be quite entertaining.

At its simplest, Jak & Daxter has you run, jump and dive around the level collecting very obvious things that can often be traded for something more important later on. At its more complex, it presents you with a puzzle to solve in order to get rewarded.

On one level, a pelican steals/eats the Power Cell you have your eyes on, and so you'll need to spook it so that it throws the Power Cell back across the level. But it still wants it, so it flies off to get you, putting you in a race with a pelican. I hope you can spot a route across the seas and up the cliffs to get there before it.

I say 'on one level', but what I should be saying is 'in one section of the world'. The game is divided into sections, like the shoreside village and the jungles, but there is no loading between the two, there are no menus to dive into to choose which level to head to next. You just explore. You run into an area that looks new, and lo and behold, it turns out to be an entirely different section of this island, full of its own things to collect, its own characters to help, its own story to progress...

The characters are all animated and voiced like a Disney cartoon. They're over the top, they're expressive. I'm not a massive fan of the whopping great big ears on every- hang on, Ratchet has pretty big ears too... I'm not an enormous fan of the style, but it's not hideous, and like everything else on display, it's quite the sight to see.

Jak controls well, with Daxter often hanging onto his shoulder for dear life as Jak jumps and spins around the place. You have a punch and a very Crash-like spin attack, and you can combine them with jumps, crouches and dives to perform ground pounds, or to extend your jump by juuuust that little bit more, and the challenges you'll find to get these collectables will test your knowledge of those controls.

I was enjoying my time with Jak & Daxter. I had some head-scratching moments where I couldn't work out what it wanted me to do - and I still expect that I'll be backtracking as I learn new mechanics or have new ideas on how to get something done - but I've got a bigger problem when it comes to playing this further: No Memory card. Or, more specifically, no idea where I left my memory cards.

It's an easy fix, should I want to continue playing on original hardware, but there are now a few questions I need to ask myself. Do I have The Jak & Daxter Collection, and if so, do I want to try going through the game(s) on that? Ooooh... it appears I do... Vita or PlayStation 3. That's gonna get me thinking...

So it's quite evident that I want to play more of this game. I've not exactly said a whole lot about why I or anyone else should play it, but I see nothing terribly apparent that would cause me to not recommend it. It's easy enough to get to grips with in no time at all, it's challenging enough to keep your attention for a while at least, and it's got character and quality oozing out of everything - look, feel, sound.

I still feel Ratchet & Clank is my go-to, but I'll have to get around to trying out the Jak & Daxter Collection to see if there is any wiggle room for that statement. Daxter's likeable, that's a start. Is he funnier than Clank? Is his self-titled spin-off better than Secret Agent Clank? I'm getting too far ahead of myself.

Play Jak & Daxter: The Precursor Legacy if you like the genre and prefer robust controls to whatever the N64 could offer. Yes, sure, that console may be the spiritual home, but when a game comes along that takes what works and adds much more, it's worth checking out.

Don't ignore the technical marvel that is The Precursor Legacy. Even if you think Ratchet & Clank is better.

So I fired up Jak and Daxter on the PS Vita this afternoon, and while it was slow going on account of the difference in controls, and noticeably lower quality in the graphics and framerate department, I was at least making progress.

That was until I went to a new area for me, and somehow made my way face to face with an angry plant, spitting out spikey bastards. I can see the format the fight, it's easy enough. Defeat one little fella, hit the plant. Defeat two little fellas, hit the plant...

After an hour or so of playing, and literally tens of deaths (maybe even close to a hundred), most of which actually occurring on the short, bottomless pit jumping route to the boss fight, I rage quit. I defeated three little fellas, and then got ready to hit the plant for the last time I'm sure before the bastard went and ate me. Instant death.

I'm not restarting. I know what'll happen. Get infused with blue super energy, open the door, fall into a pit. Repeat, jump to the platform in the middle of the pit, miss it because it turns upside down. Repeat, get past the pit, get to the second pit, get hit by a fecking thornbush, lose one of my three chunks of health before I even get to the boss...

It can get stuffed. If I'm playing Jak and Daxter again, it sure as hell won't be on the PS Vita. I want to enjoy it, not swear profusely at it.

While the majority of the Naughty Dog staff were still working on Crash Team Racing (the better karting game, I'm sure you'll agree), just two were left to start working on the next project, Project Y, which would turn into Jak & Daxter: The Precursor Legacy over the course of three years.