The first time I saw a Total War title was on the BBC show, Time Commanders. Take a group of most likely non-gamers, present them a historical war to recreate in Rome: Total War, and have them command their troops to victory.

Back then, in 2005, I wasn't aware that it was even a playable game outside of the TV show, let alone that it was from the Total War series, whose second entry, Medieval: Total War, is on this 1001 list. What was I doing in 2005? Sure didn't involve PC gaming, though it was around the time where I heard some of my friends talking about building a PC. It sounded expensive. It seemed complicated.

Anyway, Medieval: Total War gives players control of hundreds of troops in a real-time strategy battle, and it is as daunting as it is intriguing. 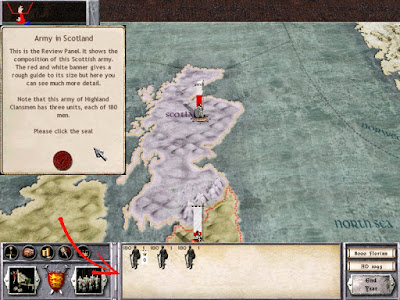 As you'd expect, Medieval has several tutorials to teach you all it has to offer, and surprisingly for me, it's not just real-time battles. The first tutorial presents a game like Crusader Kings, only without the requirement for a University degree to get into. 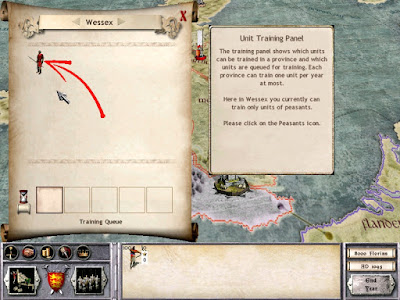 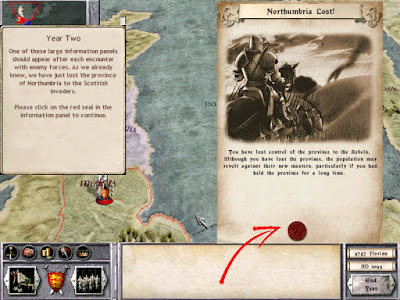 From the land you lord over, inside the castles that protect you, you train troops and manoeuvre them around the continent looking to keep your neighbours in check. Time progresses when you decide to advance the clock, which you'll need to do to get your peasants ready. 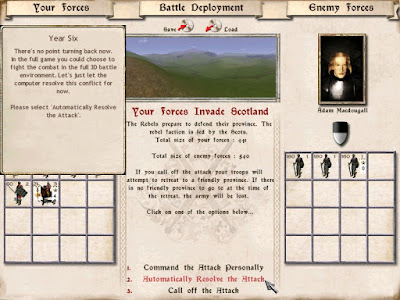 When units are ready for a fight, wherever they may be, Medieval gives you the option to let the computer do its thing, or to head down to the battlefield and take command of all those troops directly. This tutorial wants us to skip the good bit. The next tutorial (and the numerous tutorials after that) is the good bit.

Units respond to clicks to move, clicks to attack, and clicks and drags to line up in formations more suited to their strengths. Cavalry can be told to spread out to reduce the effectiveness of enemy archers, before forming a wedge to punch through the opposition ranks.

Once you've given an order, you can sit back and watch the results, or, if you're a proper commander, find another unit to issue orders to.

Forming lines of archers at the top of the hill channels my inner Sun Tsu. Their line of sight is improved, as is their morale and fitness - they don't have to move, but the opposition needs to fight uphill. To protect my archers, the infantry can be lined up in front of them. The archers can fire over their heads, and again, they just need to sit and wait for the enemy to come to them.

When it all comes off, it feels fantastic. My troops are content, ready, and superior to their opponents. They're not going anywhere. The odd man may fall, but the unit retains its shape and follows their orders to the letter.

But war isn't a neatly designed tutorial, and after each section, I'm given a scenario to test out my newly learnt skills.

I see a lovely hill to plonk my archers on top of, but it's a real-time game, and by the time I'm there, so is the enemy. My neatly laid plans never got going, and chaos descended. Selecting units isn't terribly tricky, but choosing the right one sometimes is. I had groups crisscrossing the hill like headless chickens.

Nothing was used effectively here. The strategies at play were not those of learned commanders, but of brutes. Select unit, charge enemy. Select another unit, charge another enemy. Kill or be killed.

It worked. It wasn't pretty, but it worked. I felt ready for the game itself. There were multiple other tutorials to go through, and I'm sure they're all essential, but I did want to see something more significant. 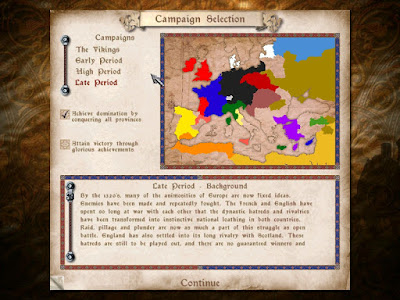 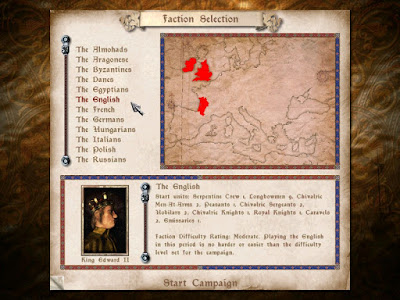 The campaign mode puts you into a time period of your choice, as a faction of your choice. They have strengths and weaknesses based on where and when they are, but the middle-of-the-road English faction seemed like an obvious starting point. 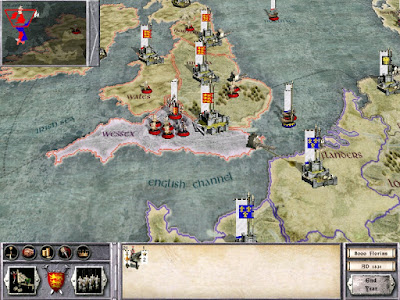 Despite completing the tutorial - I think - so little of this situation made sense. I think I moved some trinkets around but then hit the quit button. This wasn't appealing at all. 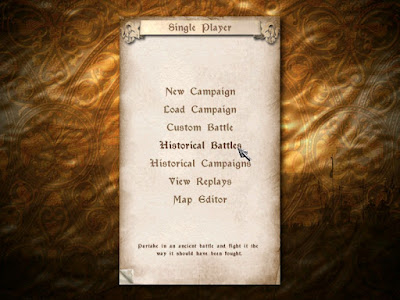 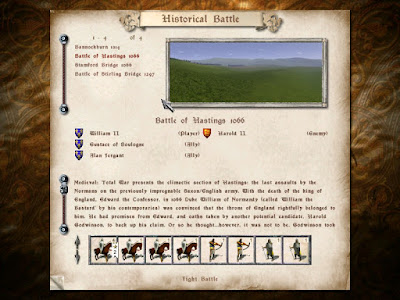 This, though... this was appealing. You can ignore that side of the game completely, and just stage battles of your own creation, or try your hand at historical battles. I am vaguely aware of most of these, but it was the Battle of Hastings that took my eye. No pun intended.

There were troops everywhere, and grouping them together was the first thing I thought of doing. It makes things easier to love around, for one thing, and with this much happening on the screen, I want things to be easy to achieve. Hotkeys for formations and orders will be swiftly learnt.

As I push troops forward, I learn that I have allied forces in this fight. I suppose I should have read the introduction screen. There's no need to order these guys around - I don't even know if I can - but everything is going on at once, so I better move something somewhere at least.

What is this Unit? Who the hell are you, Eustace? Chaos. The inevitability of Medieval. Utter chaos.

There are plans in my head, but they are not translating into the battle. I have archers sat where I wanted them five minutes ago, doing nothing but worry about the massive clash taking place to their right. Infantry and Cavalry clatter through each other as best they can. My allies are doing their own thing, and I've no idea what that is.

I soon see only one course of action. Regroup, move as one, and zerg rush the English. 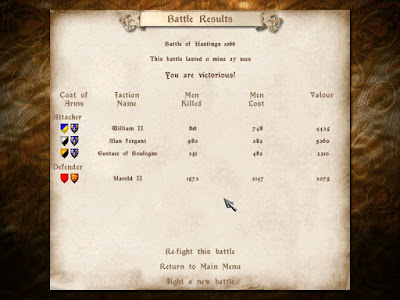 That's Medieval: Total War in a nutshell. It's not pretty, but it works. It would work a whole lot better in more experienced hands, and would probably feel great to go from a continental campaign to a local skirmish, rather than just letting the random number generator out for a spin, but it requires a fair bit of work to get going.

In games like these - and it's Crusader Kings II that springs to mind - there are so many things to think about that my brain grinds to halt and nothing gets done. Here, it's one click to start training infantry, a drag and drop to move them, a button to advance time on your terms. It is more like a turn-based board game than a video game. I like board games. A lot. But this isn't a board game.

After noping out of that side, I had more fun with the meat of Medieval, but even that descended from "I got this" to "Fire at will" within minutes. I like the idea of forming units up and positioning them to suit their strengths and to work well as a team, but I'm just not ready for the real-time nature of it all. If this bit was a board game...

Medieval: Total War is appropriately named. There's a lot to sink your teeth into if this period of history is your thing, and commanding vast numbers of troops is your jam. I wish I could grasp it better, and act quicker, but it's a little too slow and cumbersome to give me that feeling.

Could I tweak settings, learn hotkeys, and practice? Yes. Will I? Ehhhh. Probably not. Medieval: Total War isn't bad, not at all. It just shows its age a little. I think I'd enjoy a sequel more. I'll be on the lookout.

As for Time Commanders, they did the Battle of Hastings too:

Too many cooks, I suppose...

Up to ten thousand troops can take part in a single battle.