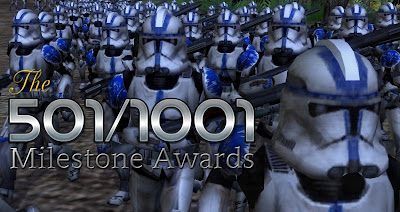 Wow. The halfway mark. And it's only taken four years. I'm delighted I decided to not play every one of these games to completion, otherwise, I'd need to clone myself, and the world does not need that.

Where have we found ourselves this time around? It is 2001/2002, thereabouts. The PlayStation 2, Xbox and GameCube are holding much of the attention, but the everpresent PC is still home to some greats, and portable gaming is picking up some speed under our noses.

It is this period in video game history that I am most familiar with, and yet in the bucketload of games between Skies of Arcadia and Metroid Prime, I've had my eyes opened to titles that I never knew about, all thanks to this bloody long list of games.

It's finally time for The 501/1001 Milestone Awards. The Showcase of the Immortals. Has my world been turned upside down thanks to any of these winners? No. That'd be a tad extreme. But it has been altered for the better, just as the Emperor has foretold.

In a history spanning decades, and an industry worth billions, there are thousands upon thousands of games that go unnoticed because they're just games. I'm sure they mean something to someone, but to me, they are simply The Indifferent 5. They are, in no particular order:

I don't want this stunted slime in my sight again.

Actually, no. Those games I will see again, it's just I'll pull a face of confusion mixed with disgust when I do. This game, on the other hand... What Was That 1 Even Put On The List For?

Rereleasing games for new audiences, remixing old titles into new, combining the best of both worlds to create a classic. But it didn't work. What Was Mario Kart Super Circuit Even Put On The List For?

It's just... why? You already had two Mario Kart titles on there. Those two, for goodness sake.

Instead of that portable waste of space, we need to fill the 1001 list back up to 1001 video games, and there is a ridiculous oversight that boggles the mind and leaves me to scream only one phrase:

I effectively traded my PlayStation to get my hands on The Getaway, and I got it so early in its life that I got the unaltered version, where you drive a BT van on a mission to sabotage the cops' phones or whatever it was. Can't remember. The point is, BT didn't like how they were portrayed in a digital recreation of the city of London. Like, all of it. It's not like the mission had them give criminals their van for nefarious purposes. We stole it. But this was the first game to really flirt with reality.

Grand Theft Auto III might have got the headlines for driving like a maniac in a fictional city inspired by New York, but The Getaway got them for having you drive Alfa Romeos through Soho at high speeds while outrunning slightly offended Yardies. Or whatever. It's been a while. I really need to go back at play that janky looking cockney simulator again, and so should you.

Criminal exclusion, this one.

Aaaand, relax. It's time to go through The Top Ten for this latest batch of hopefuls. It could have been a top 20, but that doesn't cut through the fat enough, does it? There's hardly any point cutting 50 down to 20. Cutting them down to ten was a right pain, though, but I'm more or less content with what we've got here. They are:


10: Luigi's Mansion, Nintendo EAD
A surprising entry, perhaps, but I was going through the list and it leapt out like the ghosts that inhabit it. I'll get the hoover out in a minute.

9: Gran Turismo 3: A-Spec, Polyphony Digital
Snuck onto the list because I played so much of it as a teenager. It is showing its age, but I couldn't ignore it.

8: Metroid Prime, Retro Studios, Nintendo
Hooked me more than I thought it would, and stands out against almost anything you can throw at it.

7: Vagrant Story, Square Product Development Division 4
Just picturing what it looks like pleases me. Why does a PlayStation game do that? Pleasing artwork is what pixel art is for, not polygons.

6: Devil May Cry, Capcom
Oozing with style, it's a shame it shows me for what I am: a blithering, button-mashing idiot.

5: Jak & Daxter: The Precursor Legacy, Naughty Dog
Still to decide whether I play it on the PS Vita or find a PS2 memory card, but it's going to get played.

4: Halo: Combat Evolved, Bungie
Thirty seconds of fun. In today's hectic world, that should be easy to catch up on...

3: Grand Theft Auto III, DMA Design
Why wouldn't you put this on the list? It actually made people want to play a GTA title. What an achievement.

2: Metal Gear Solid 2: Sons of Liberty, Konami Computer Entertainment Japan
I took one look at the screenshot I went with for the intro and remembered the sheer amount of technology that was stupidly optional in that one room, and never used in the game - or the series - again. Did you shoot up that bar?


Have you worked out what was better? Can you recall what console I went bonkers over at the tail end of this batch of games? There can be only one number 1, and its name is Advance Wars. I mean, come on, of course it is. It's a war on the go, in your pocket, with dinky little cartoon tanks. It's the dog's bollocks.

But how does it fare against all the other games? Where does Advance Wars rank amongst the 501 games I've looked at so far. Where do any of these latest titles lay in the grand scheme of things? Are they good enough to break into The Topper Than That 10?

The only games you should hold dear, until at least the next Milestone Awards, are:


10: Tony Hawk's Pro Skater 2, Neversoft
It's wobbling, it's shaky, the combo is going to come crashing down, hold it steady now...

8: Metal Gear Solid 2: Sons of Liberty, Konami Computer Entertainment Japan
It makes no sense, and yet it speaks so much truth. How, Kojima, how?

6: Super Mario Kart, Nintendo EAD
Get out of here with your combined game. Nothing gets mixed with the O.G.

5: Tekken 3, Namco
I have played Tekken 7 since reminding myself that I owned it at the last Milestone Awards. It feels like Tekken. I'm still no good at it.

4: Advance Wars, Intelligent Systems
Oh blimey, it must be up against some fierce competition, huh? I want to play it, but apparently, I want to play some other titles more.

3: The Legend of Zelda: A Link to the Past, Nintendo EAD
Even with some stunning GBA titles trying to look better, this one still sticks out.


No obvious budging at the top this time around. Breaking the crushing grip that the greats have on their Milestone Award placements will prove to be a tough task, but there is still most of a decade and 500 more games to come and try their luck. Surely something's got to give. We can't have peaked already.

To find out, join me for the next one, Dungeon Siege. It sounds like it's harking back to the good old days with a name like that. I wonder what I'll think about it in however many months it'll be until the next Milestone Awards.