The military simulator is, as one might expect, not the easiest of genres to get into as a beginner. Demanding from the offset and fueled by realism, these games are nonetheless somewhat successful, spawning few imitators but a great many community-made mods and custom maps. The genre's success today is arguably thanks to Operation Flashpoint: Cold War Crisis.

The year is 1985, and your humdrum existence in the US military is about to become an awful lot more dangerous, as you'll face the business end of all kinds of guns in this open-world tactical shooter.

I don't expect to get very far through this one... 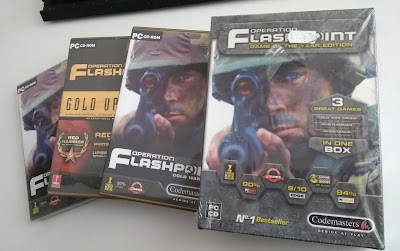 
Operation Flashpoint is everywhere, apparently. People just bin this game, and I don't think I've paid for a single one of these copies. I've got the original release, complete with its 3D keyboard control field guide; there's the Gold Upgrade, which comes with an official Prima strategy booklet to walk you through the missions; there's a version of Operation Flashpoint in a gold box, but that doesn't appear to have any Gold Upgrade stuff inside; and then there's a Game of the Year Edition, complete with shrinkwrap, that someone either bought for £26.95, or couldn't sell for £26.95. I actually don't know what goodies come inside that one. Tempted to open it...

I picked one of them to install, but apparently, the game was already on my computer. Either I'd already installed one of these and forgotten about it, or it was detecting that I owned ARMA: Cold War Assault.

Operation Flashpoint is the first ARMA effectively. The names have changed in the decades since, but that's publishing - we're still playing the same massive open-world PC military simulator.

I'm just going to address the elephant in the room now: it looks horrendous, yes. Photographs as textures, seemingly stock animated character models, and writing that does nothing to draw me into this Cold War world. It doesn't exactly hold up well when viewed twenty years later.

This is not a cinematic video game. This is as simple as you can get to deliver a plot that frames the gameplay, and Operation Flashpoint is all about the gameplay.

I've skipped the cutscenes because they're nothing special, save for the faces, I suppose, but the plot is as follows. We've lost contact with an entire island as it has been taken over by unknown forces. With no meaningful support in range, we have to do what we can with what little we have until reinforcements arrive, and by then we'll hopefully know who we're up against.

So, off we go in our helicopter to the landing zone.

You might argue that the controls for this game are a little awkward, and I'd agree. WASD is at least the core of the movement, but to sprint requires you to press W+E, to crouch is on Q, going prone is down on Z, and then all the way over on the other side of the keyboard is the command window, where you can choose from a number of responses and shout over the radio waves. 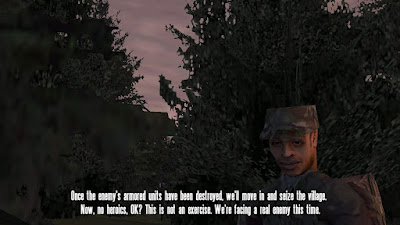 That radio is the main way you're going to be able to keep track of what's going on, and it even has a command for you to ask for objectives to be repeated, because with all of the chopped up, artificial speech, you're bound to miss something.

Missing something is a common occurrence here, as you'll be struggling to see exactly what is getting barked over the radio, even if it's highlighted on the HUD for you. Even switching to the third-person view, or zooming down your rifle sights won't necessarily make it easier for you to find the opposition, and you need to know where the opposition is.

This is, first, a foremost, a military sim. One bullet is all it takes to really screw over your day, and you often won't even know where it came from until the kill-cam shows you. Crouching makes you a smaller target and crawling smaller still, but whatever your pose, if you're hit by an unseen foe, you're going down.

After the restart, it was another slow/realistic approach to this town, full of pixel hunting and burst firing in the hope that you're within range and somewhat accurate. Soldiers went down everywhere, with the radio screaming updates about the situation seemingly every second. By the time I got into town, there was only two of us standing, and I bet my commander (or whomever, I wasn't paying attention to military ranking) was alive only because he was scripted to be.

Our next objective was another town, with more people to shoot, only this time there would be more vehicles to avoid/protect, depending on who was driving. I wasn't sure. I'm fairly certain I'm not equipped with a rocket launcher or anything, and while I could hop into the driving seat of any of these vehicles, I'd imagine I'd need to wait until later in the game to really explore that degree of freedom in its mission structure.

Advancing through the greenery on foot it was, then.

While I was always out of position, not having a clue what anyone was referring to, I nonetheless felt like part of a unit, rather than a lone hero or a special forces operative like most first-person shooters. I was a grunt with a gun, and when I needed to shoot something, I ought to shoot well, because lives are on the line.

I didn't shoot great. There were casualties, but I'm sure I got some kills in. I had to take ammo from down squadmates, owing to my excellent accuracy, but I'm still in the fight, and there's still a mission to do. I'm still not sure what it is, though.

Hearing reports of tanks or something in the area, we retreat to the tree line, and I have a look at the map for clues.

Sure enough, there are scribbles and compasses and objective lists to give me a better heads up than the radio ever did, but even with all of this, I get the impression that my job is to just stay alive and be somewhat useful.

And then I ragdolled into the sky after being blown up by a tank shell. The restart checkpoint is not after we've secured the town. It was never going to be an easy game, this.

But I'm glad I've played it, because I'm aware of what ARMA is, and how successful it is, despite being on the trickier side to get into. I don't know if starting the series with its first incarnation is wise or not. I suppose it's the same core mechanics game after game, just with better graphics, physics, animations... I guess we'll find out when it crops up on the 1001 list again.

Operation Flashpoint/ARMA is to first-person shooters what IL-2 Sturmovik is to flight games, and if you liked the insane amount of detail in that military flight sim, then you might have just as much interest in this game. It's certainly more approachable to me, but then I'm far more used to walking and running than I am flying, both in games and out.

There's potential for me to keep playing, though I'm not a fan of having to start entire missions again when you fail, and I'd imagine there's a fair amount of failure to be found here. The controls are awkward, the graphics are present, the plot is... well I don't even know if the plot is important. I suspect not... all in all, it's not the strongest of presentations, but it does something different, and it does it well.

If you don't think a game could ever be a real military simulator, the same engine in Operation Flashpoint was used in Virtual Battlefield Systems 1, a military simulator whose first customer was the US Marine Corps. The developer of VBS1? Bohemia Interactive.