Metal Arms: Glitch in the System

Glitches in the Emulation, too. There's a game for everybody, especially on the PlayStation 2, and if you were looking to control a dinky little robot with an arsenal of weapons, Metal Arms: Glitch in the System might just make it to the top of your list.

With third-person shooting and the ability to take over and remote control other robots, like the rather old school Paradroid, Metal Arms seems to tick a fair few boxes on the list of stuff we want to see in an action game.

But what's it about?

On some distant planet made of scrap, we, a robot named Glitch, are found buried in the rubble. Our memory boards out of action, we are a blank slate in this new world of Droid Town - though we do look remarkably similar to all of these other robots... Are we sure I've not just had an accident at work? 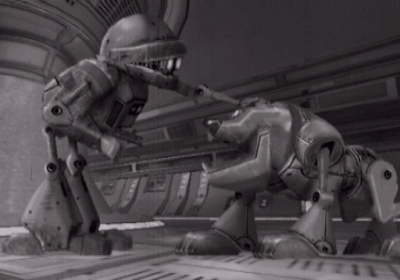 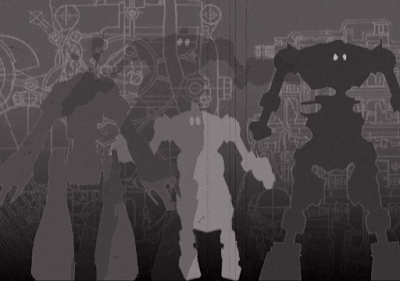 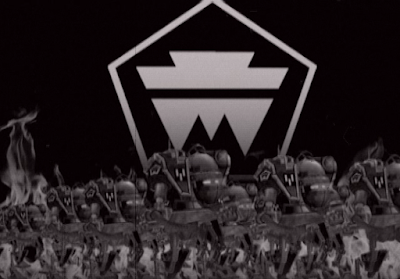 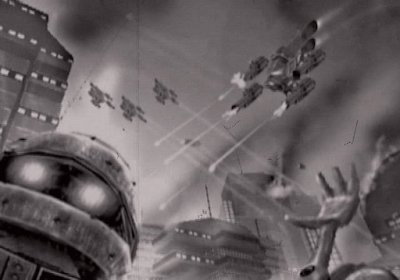 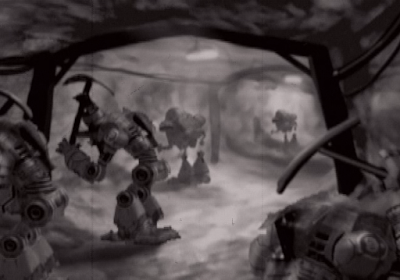 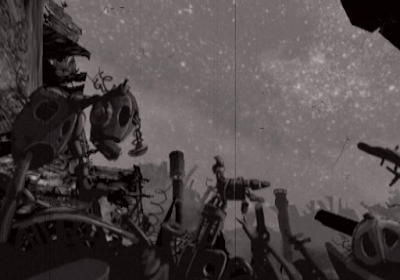 Putting every other 'bot to work in the mines, he tyrannically rules the planet. But for how long? An underground resistance is forming, lead by Colonel Alloy, and their numbers are swelling.

There were some recognisable voices in this cutscene, but I didn't actually catch a word of what was said because the sound mix was all over the place - the vocals drowned out by the music, and no option for subtitles.

The gist of it is that we sign ourselves up for some action, despite having been recently buried in rubble and whatnot. I'm sure it'll be no trouble at all to get back on our feet. We're a droid, it's not like we need recovery time. 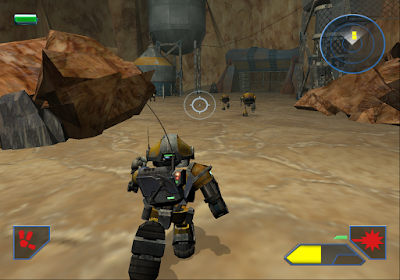 The poor sound continues as we are let loose with the game proper. It doesn't handle too badly, and while we're a little dark, we're a rather detailed little robot, stomping around the place, armed with a laser pistol.

This is some kind of training area, but I'm distracted by one or two or twenty graphical problems in the emulation. 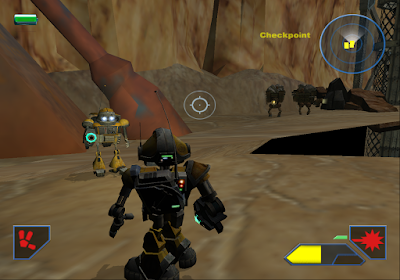 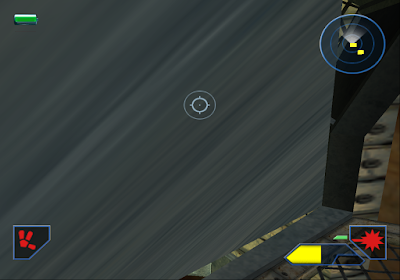 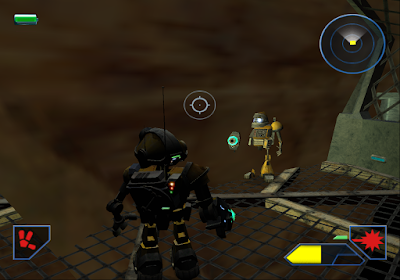 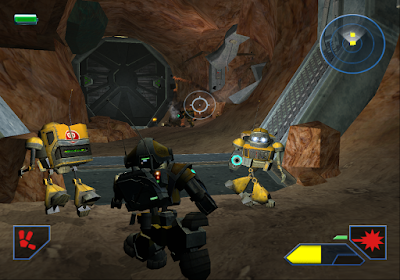 Once fixed, I'm able to follow these two troops around, watching every other robot running the other way, presumably for a good reason. We must have lost our minds to want to go this way. If I haven't already lost my mind, I'm about to... 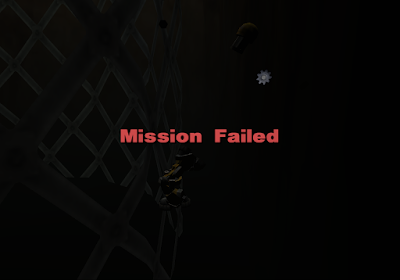 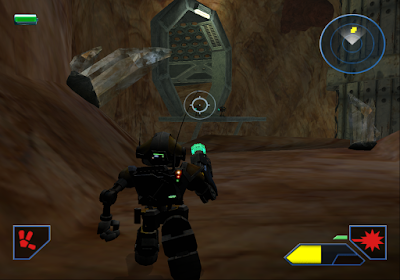 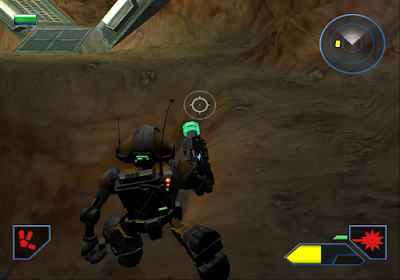 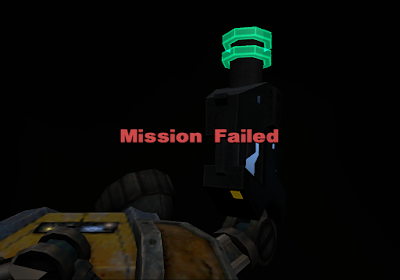 There is a double jump move in Metal Arms, and there is a platforming section to show off how it works. You jump from a ramp to a pillar, from the pillar to a ledge, from the ledge to the next section of the tutorial.

If you fail, you can try again, of course, providing you don't fall down the bottomless death pit that you can find mere feet away from the double jump obstacles.

"So just double jump. It can't be that hard." Thanks for the advice. The problem I'm having is that there is a delay between jumps. You need to jump, wait a fraction of a second, and then press jump again to flip for the second jump. If you're used to any other method of double jumping, it'll take some time.

And then you've got to factor in whether to run and jump, or just jump. There is a difference. You've got to slow down at a ledge almost like the old Tomb Raider games to line up a jump, but you're far more manoeuvrable than old Lara Croft, and going from a breezy run to stopping and lining up a jump feels awful. 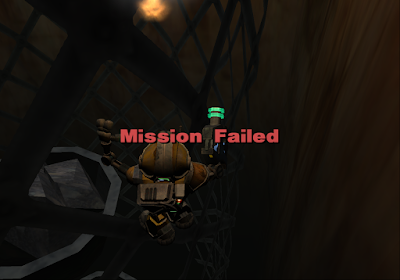 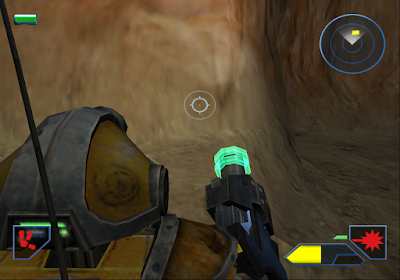 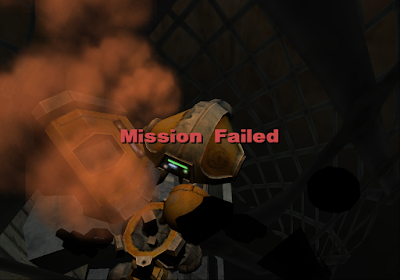 I didn't have a good time with this game, that much is obvious. Can I see enough in it to want to find out more about it?

For starters, I did say that I recognised some voicework. It sounded stereotypical of robot generals and bumbling soldiers, but they're not half-arsed deliveries (even if I couldn't really hear them over the music). I don't know what the plot is beyond what I could work out from that intro video, which seems rather generic - overcome the bad guys, restore the peace, etc.

The designs of the robots aren't too bad, and they're much more detailed than the levels are. Granted, I've only seen caves and dirt, but I get the impression these characters will look better than almost everything else you'll see on any given screen.

And then there's a lot of remote control gameplay that I'm missing out on, as Glitch takes over various robots for one reason or another. Probably puzzle solving. Action, adventure, platforming, puzzles, shooting... Metal Arms does seem to be going all out for things to do.

But will I ever see it? Well, yeah, I'll probably see it, but I don't have high hopes for seeing me playing it myself. In a calmer, more focused frame of mind, I'm sure I could double jump when required. It's absurd that that is the big reason I'm abandoning this one so early, to be honest, but that's the kind of person I am.

Too many games, not enough time. Metal Arms: Glitch in the System is probably a pretty good time, but I've yet to find enough time to give it a real chance.

Rob Paulsen, Dan Castellaneta, Corey Burton... I wish I could actually hear your lines over all the other audio...